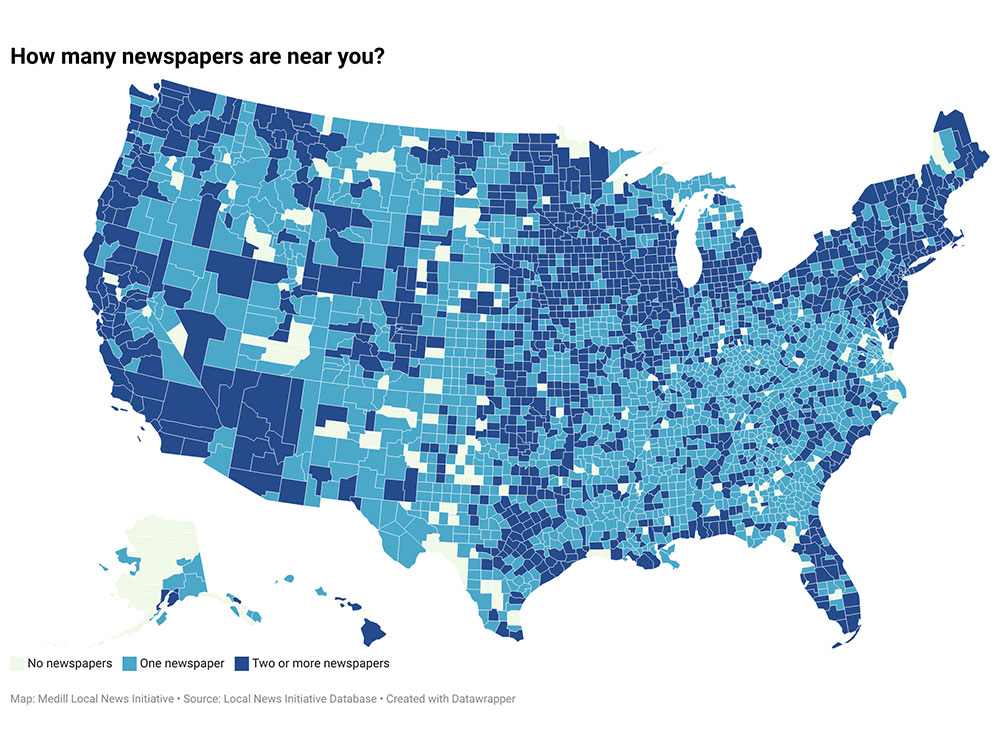 Medill Project Researches the State of Local News in 2022

The United States continues to lose newspapers at a rate of two a week, further dividing the nation into wealthier, faster growing communities with access to local news, and struggling areas without, according to a report on the state of local news from Medill.

Between the pre-pandemic months of late 2019 and the end of May 2022, more than 360 newspapers closed, the report by Medill’s Local News Initiative found. Since 2005, the country has lost more than one-fourth of its newspapers and is on track to lose a third by 2025.

Most of the communities that have lost newspapers do not get a print or digital replacement, leaving 70 million residents – or a fifth of the country’s population – either living in an area with no local news organizations, or one at risk, with only one local news outlet and very limited access to critical news and information that can inform their everyday decisions and sustain grassroots democracy. About 7 percent of the nation’s counties, or 211, now have no local newspaper.

“This is a crisis for our democracy and our society, said Penelope Muse Abernathy, visiting professor at Medill and the principal author of the report. “Invariably, the economically struggling, traditionally underserved communities that need local journalism the most are the very places where it is most difficult to sustain print or digital news organizations.”

Recent research shows that, in communities without a strong print or digital news organization, voter participation declines and corruption increases, Abernathy said, contributing to the spread of misinformation, political polarization and reduced trust in media.

The Medill report on “The State of Local News in 2022” focused on researching and analyzing the health of local newspapers and local digital outlets. While newspapers declined over the past two years, an increase in corporate and philanthropic funding contributed to the establishment of 64 new digital sites focused on covering either state or local news. Most digital sites are located in digitally connected urban areas with diverse sources of funding.

“It is critical to understand what is working and where there are still gaps in the flow of reliable, comprehensive and timely news and information,” said Tim Franklin, senior associate dean, John M. Mutz Chair in Local News and director of the Medill Local News Initiative. “That way we can build solutions to sustain local journalism in communities that have, so far, been overlooked by entrepreneurs and potential funders.”

The largest news chains — Gannett, Lee Enterprises and Alden Global Capital — control many of the country’s surviving newspapers and continue to close or divest underperformers. The most active buyers in recent years have been privately held regional digital chains, such as Paxton Media Group and CherryRoad Media, which bought its first paper in 2020 and now owns 63 papers in 10 midwestern states.

The report found that some for-profit news organizations are prospering, especially those in affluent or growing communities, and nonprofit and hybrid business models are being pioneered in cities from coast to coast.

“There are signs of hope,” said Franklin. “New nonprofit digital local news startups have launched or been announced in places like Baltimore, Chicago, Cleveland and Houston. Some legacy news outlets are deftly transforming from print to digital. There are unheralded local news leaders who are adapting and experimenting with new models. And local news is increasingly being delivered through newsletters and other digital platforms. But the need to innovate is urgent.”

“Medill’s local news audience research and strategy work is providing tangible, actionable insights for local news organizations at a critical time for the industry. And we expect to expand our commitment to this effort in the coming months,” said Franklin.

The News Desert report will be published on the Local News Initiative site, beginning June 29 and continuing into early August. This is the fifth update of the report since Abernathy first published it in 2016.

Photo: A color coded map of the United States by county showing which locations have no newspapers, one newspaper or two-plus newspapers.