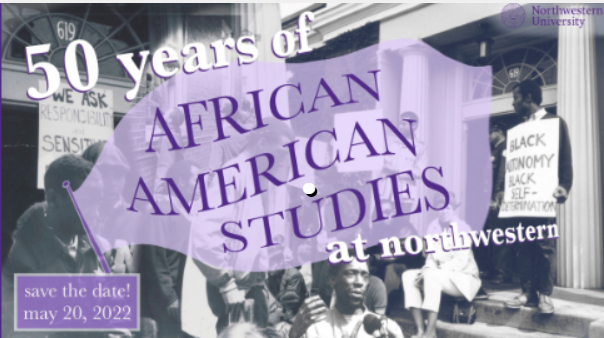 Northwestern’s African American Studies Department (AFAM) will be hosting and celebrating its 50th anniversary on May 20, 2022. The event will celebrate all that the department has achieved to date since its inception, as well as map out what they hope the next 50 years will look like. The anniversary celebration will be available both in-person at the Block Museum of Art and virtually over Zoom. Current students and faculty are welcome to attend, as well as alumni and anyone else who might be interested.

AFAM finds its roots in the Bursar’s Office Takeover in 1968, according to Northwestern’s commemorative web page of the historical event. Otherwise known as the May 4th Agreement, it marks the 38-hour peaceful occupation of the Bursar’s Office by 120 Black Northwestern students. The occupation protested the issues of racism Black students encountered on campus, but presented a list of demands for the university. These included increasing the percentage of Black students in the incoming student population, providing more and greater scholarships for Black students, designating separate living spaces for Black students, and creating a separate Black student union. The Black House on Sheridan is a direct result of the occupier’s efforts, and functions as the Black student union to this day.

“It is important to celebrate this 50-year milestone to give honor and respect to all of the people who did the work and made the sacrifices for us to exist today,” said Mary Pattillo, the Harold Washington Professor of Sociology and African American Studies and chair of AFAM, “and to celebrate the people who have been educated by this department over the years.” The research done by AFAM alumni – from law to medicine to journalism to education to social justice – is all encompassing, and AFAM’s overarching goal is to “address that research to the aims of Black liberation.”

Despite the progress made by the May 4th Agreement and AFAM’s 50 years of work, the goals expressed during the Bursar’s Office Takeover remain unchanged. AFAM faculty have published hundreds of scholarly books and academic articles challenging the boundaries of studying race, gender, sexuality, and culture, but they have also led and participated in countless struggles, from increasing Black enrollment and faculty to the anti-apartheid movement.

“Our impact on our students,” said Pattillo, “on Northwestern, on academic fields, and on Evanston and Chicago and beyond, will continue to be our work in the years to come.”

Raedell Boateng, a Northwestern alum who graduated from her undergrad in 2007 with a major in journalism and a minor in AFAM, said “My decision to minor in AFAM studies was 100 percent grounded in how much my Black femininity was not seen/valued and [that was] why the telling of our stories became very important to me during my undergrad. I found that the promoting of objectivity in journalism wasn’t going to work for me, but how to craft a story—the visuals, the words, the sources of information—is the most important thing I learned in Medill.”

Realizing in her senior year that she didn’t want to be a journalist, Boateng went on to become a teacher through Teaching for America, a nonprofit organization that trains teachers to expand opportunities for low-income students. She is now an educator and liberation life coach and uses Black women’s stories and experiences as a launching point across all of her work.

“I can’t imagine not being an educator,” she said, “and my experiences in Medill and AFAM studies play a huge role in how I approached teaching and in what I do now. I also entered into teaching wanting students to see the world through windows and mirrors—to value others and value who they are—and to understand how privilege creates barriers to holding such values, but literature, storytelling, and justice will help us overcome.”

Regarding this momentous anniversary, Pattillo said, “We decided to make this like a reunion and to celebrate the students who have come through the classrooms over the last half-century. Come to see old classmates. Come to see former professors. Come to see old colleagues. Come to find out what people have done since you last saw them. Come to see how strong the department is because of the people who make it up. Come to hear how African American Studies acts in the world to make it better.”