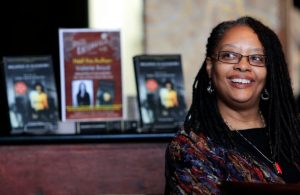 Photo: Valerie Boyd, the author of a critically acclaimed biography of Zora Neale Hurston, appears at a reading in D.C. in 2009. (Susan Biddle/The Washington Post)

Valerie Boyd, a journalist who chronicled the life of Zora Neale Hurston in a critically acclaimed biography and edited a forthcoming compilation of the journals of Alice Walker, thus illuminating African American women of letters from the Harlem Renaissance to the present day, died Feb. 12 at a hospital in Atlanta. She was 58.

The cause was pancreatic cancer, said her friend and power of attorney, Veta Goler.

Ms. Boyd spent nearly two decades as a reporter and arts editor at her hometown newspaper, the Atlanta Journal-Constitution, training the journalistic eye that she would turn on Hurston in the biography that became her first major literary achievement of her own.

“Wrapped in Rainbows: The Life of Zora Neale Hurston,” published in 2003, was the result of nearly five years of research. Ms. Boyd charted Hurston’s life from her birth in 1891 in Notasulga, Ala., to her upbringing in the all-Black town of Eatonville, Fla., through her literary activity during the Harlem Renaissance of the 1920s and 1930s and her anthropological exploration of African American folklore, to the circumstances that led to her death in penury in 1960 in Florida, where she was buried in an unmarked grave.

“Because I am a Black Southern woman, I felt very close to Zora, as if I could paint a picture of her life almost from the inside out,” Ms. Boyd told an interviewer for the online magazine In Motion. “I wanted to give readers a sense of what it was like to be Zora, to walk in her shoes, to live inside her skin.”

Advertisement
“I was just amazed,” Ms. Boyd said, “that a book published in 1937 could speak to me so clearly and so resonantly through the decades.”

Years later, she became a regular attendee of the annual festival held in honor of Hurston in Eatonville. In 1994, she said, she attended a speech there by Robert E. Hemenway, the author of a 1977 biography of the writer.

By Ms. Boyd’s account, Hemenway surveyed the shortcomings that he said were inherent in his book as a work about a Black woman written by a White man. According to Ms. Boyd, he said that Hurston was owed a new biography, by an African American woman.

“When I heard those words, I felt it was my calling,” Ms. Boyd told an interviewer with Northwestern. “But even though it felt like something I would do, the thought of doing it was just frightening.”

She put off the task, judging herself not ready. Less than two years later, a literary agent called to ask if she might be interested in writing a biography of Hurston. “I felt like fate was calling me — and that Zora herself was calling me,” Ms. Boyd said.

Hurston had complicated the job of any future biographer, Ms. Boyd wrote, by disguising “many truths of her life in a confounding but crackable code.” In order to obtain schooling at a Baltimore high school, she reported her age as 16 when she was in fact 26. Her 1942 autobiography, “Dust Tracks on a Road,” however skillfully written, proved an unreliable account of the facts of her life.

With the passage of time, more dust, as it were, had clouded the story of Hurston’s life. It had been partially cleared by Hemenway’s book and by volumes including “Zora Neale Hurston: A Life in Letters” collected and edited by Carla Kaplan (2002). But in “Wrapped in Rainbows,” reviewer Jake Lamar wrote in The Washington Post, Ms. Boyd produced a “scrupulously researched, gracefully written” work that will “most likely remain the definitive Hurston biography for many years to come.”

Ms. Boyd’s project was a journalistic odyssey, in which she located the few living acquaintances of Hurston and scoured the archival records of her life. But it was also an “intuitive, spiritual process,” she said.

“Sometimes,” she told the Northwestern interviewer, “it seemed as if Zora would look at me in a very approving way, and sometimes she seemed to be looking at me like, ‘Oh, please.’ And I would dutifully press delete.”

Ms. Boyd often reflected on the sisterhood of African American writers, observing that “Zora’s, Alice’s and my generations are holding hands.” Alice was Alice Walker, the author of the 1982 novel “The Color Purple,” which received the Pulitzer Prize and the National Book Award for fiction and was adapted into a 1985 film starring Whoopi Goldberg. Walker had helped reawaken interest in Hurston with an article, “In Search of Zora Neale Hurston,” published in Ms. magazine in 1975.

Ms. Boyd happened to meet Walker during her research for the biography and said that Walker, upon learning of her work, touched her face and said, “Bless you, my child.” Some years after the publication of the Hurston biography, when Walker set out to publish her journals from the years 1965 to 2000, she selected Ms. Boyd as her partner in the endeavor.

“Gathering Blossoms Under Fire: The Journals of Alice Walker,” edited by Ms. Boyd, is slated to be published April 12, according to the publishing house Simon and Schuster.

“Valerie Boyd was one of the best people ever to live, which she did as a free being,” Walker said in a statement provided by the Joy Harris Literary Agency. “Even though illness was stalking her the past several years, she accompanied me in gathering, transcribing, and editing my journals. … This was a major feat, a huge act of love and solidarity, of sisterhood, of soul generosity and shared joy, for which she will be remembered.”

Valerie Jean Boyd was born in Atlanta on Dec. 11, 1963. Her father ran a gas station and tire shop, and her mother was a homemaker.

Ms. Boyd received a bachelor’s degree in journalism from Northwestern in 1985 and a master of fine arts in creative nonfiction writing from Goucher College in Towson, Md., in 1999.

In addition to her work at the Atlanta Journal-Constitution, Ms. Boyd freelanced over the years for publications including The Washington Post. She was a senior editor at the publication the Bitter Southerner. In recent years, she was a writer in residence and professor at the Grady College of Journalism and Mass Communication at the University of Georgia

At the time of her death, according to Simon and Schuster, Ms. Boyd was at work on an anthology titled “Bigger Than Bravery: Black Resilience and Reclamation in a Time of Pandemic.” Her survivors include two brothers.

Ms. Boyd noted that, in deference to her subject, she had visited Hurston’s grave in Fort Pierce, Fla., before embarking on the biography.

“I wanted to make a connection with Zora,” Ms. Boyd told the Journal-Constitution, “so I took an offering of Florida oranges, which she loved, and some money — she never had enough money in her life — and a pack of Pall Malls.”

Just as she was leaving, she saw a black crow similar to the one that had circled over the inaugural Hurston festival in 1990. Attendees had named it “Zora.” Ms. Boyd took the sign as permission to proceed.

“I believe that it was something that I was put here to do,” she told the Orlando Sentinel in 2003. “My destiny led me to Zora.”