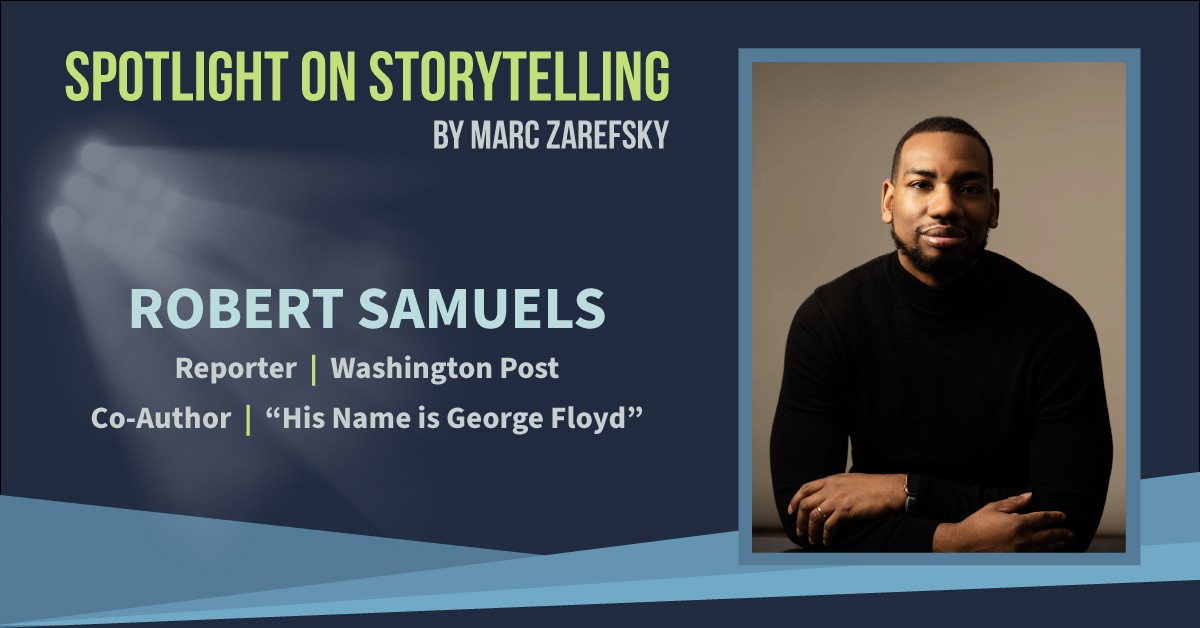 By Marc Zarefsky (BSJ07) for Spotlight on Storytelling

Robert Samuels watched footage of George Floyd’s murder like millions of people around the world, but when Samuels, a journalist for the Washington Post, first traveled to Minneapolis in the summer of 2020, he wasn’t interested in Floyd’s death. He wanted to write about Floyd’s life.

“As much as I read about him, I had no sense of his soul,” Samuels told me. “That’s what I wanted to show the world.”

Samuels earned the trust of Floyd’s family and closest friends — many who previously refused interview requests — and crafted a powerful tale of hope and horror as part of the Post’s six-part series on “George Floyd’s America.” But Samuels knew there was a far bigger story to tell, a story of systemic racism that ultimately left Floyd gasping to breathe.

“As time went on, his humanity risked being reduced into simply a face that was associated with pain,” Samuels said. “Fellow Post reporter Toluse Olorunnipa and I thought we could help restore it.”

Now, nearly two years to the day since Floyd was killed, the two are trying to do just that. Samuels and Olorunnipa co-authored “His Name is George Floyd: One Man’s Life and the Struggle for Racial Justice,” which is available for purchase today.

Samuels talked with me about the challenges of crafting such a complex story involving a person most people know of, but few know about.

The first person is my mom. Because she immigrated from Jamaica to this country, she had to learn about racism in America. She came to this country in 1973, the same year Floyd was born, and she wondered how her life would be different if her family experienced what Floyd’s had. So in my mom, I think of the person who might not have the complete depth of understanding of the issues, but enough of a baseline that you can’t take certain thoughts or feelings for granted.

Honestly, a part of me wrote it for the 16-year-old version of myself — the skinny, somewhat self-effacing kid who could not fully articulate why teachers underestimated him or why he could sometimes feel so out of place in the country he loved. I imagined him picking up this book in an airport and being empowered with the vocabulary and the historical knowledge about race and racism that he did not previously have. And I thought of how empowering it would be for him.

How, if at all, did your approach to interviews change depending on who you were attempting to speak with?

The pitch we made wasn’t that different for anyone — from any of Floyd’s loved ones to President Biden himself, who also answered our questions. We thought we had a great opportunity to help open people’s eyes to the invasive force of systemic racism, and we told everyone how humbling it would be if they could help join us on the journey. And so many people, including people who were with Floyd on the day he died who have not spoken publicly about the incident, said “yes.” More than 400 did. And every “yes” we received felt monumental.

Profile stories can sometimes have a formulaic pattern to them, yet the story you tell weaves George Floyd’s story into the larger story of systemic racism in this country. How challenging was it to piece those stories together?

Floyd’s presence actually helped us focus the story. We knew any issue we discussed had to relate to him and the movement that followed his death. The tentacles of systemic racism in this country are wide-ranging, so embedding these ideas inside the narrative allowed us to introduce them to the reader in a way that feels organic. A lot of biographies tell the “what happened” part; We wanted to put his life in the proper context and answer the “why” questions, too, because his death became such a symbol of how racism operates in America. But we wanted the reader to understand that systemic racism did not come pressing on Floyd solely because of his last interaction on earth.

What did you learn about storytelling from this project?

The benefit of planning ahead. We wrote a pretty big book — twice as many words as our publisher asked — that had many different threads and characters, so it had the potential to be a train wreck. There was no way we could have done the book and finished on time if we did not build the architecture for chapters before we started writing. We had to have a sense of building up to important scenes, make conscious decisions about when the narrative should begin to speed up and pray, pray, that we could get characters developed over the chapters. There was little about the structure that was happenstance.

What advice would you give someone looking to become a better storyteller?

Listen and learn. I think a lot of journalists go into stories with the wrong attitude that you are doing a community or a person a huge favor. No. They are giving you the privilege of trust and candor. So, listen to them. Let their answers breathe and try to interrupt them as little as possible. Ask smart follow-ups. And then, at the end, mirror back what you thought you heard them say.

What do you hope readers learn from your book?

That George Floyd’s battle to breathe in America started long before he met Derek Chauvin. He spent his life trying to navigate systems that carried the legacy of racist laws that rarely showed him any grace. I want readers to see how systemic racism works and how consuming it can be.

But ultimately, this story is about the persistence and optimism of black people in this country. Floyd, for example, never stopped trying to be a more productive member of society — and always believed it was possible. The activists who take up the fight for justice protest because they believe the country can have a better tomorrow. And even when legislation fails and their tactics get maligned, they seem to hold a brighter outlook for the country’s future than so many of the lawmakers who represent them. It is the black people of the country who are the holders of American hope in the book — and I found it to be a profound response to the structural issues in this country. When I asked why they refused to think things don’t get better, the answer was always the same: If we lose hope, the alternative is far too bleak.

That’s it for this storytelling spotlight. If you know someone who might enjoy this newsletter, please pass it along. If you want to know more about “His Name is George Floyd: One Man’s Life and the Struggle for Racial Justice,” don’t miss these reviews: