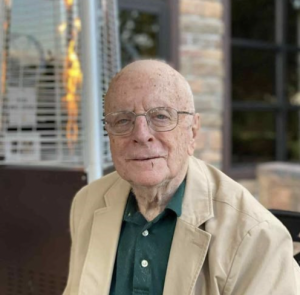 Robert “Russ” Bensley finished his final broadcast on August 9, 2022. The oldest (by minutes) child of Robert Daniel Bensley and Sylvia Gates Holton Bensley, Russ is survived by his children Skip Bensley, Robin Arena, and Vicki (Ryan) Stevenson; his grandchildren CJ, Sabrina, Jordan, Sarah, Andrew, and Ryan, as well as his twin brother Edward (Laura) Bensley. He is predeceased by his wife, Patrica Bannon Bensley. Also survived and predeceased by a sea of those who admired and respected him throughout his long career at CBS, as a horse farmer, and as an overall great guy.

Russ grew up on and around the University of Chicago campus, where his grandfather was the head of and his mother professor of Anatomy (and the first female graduate of the University of Chicago Medical School), and his father and aunt were integral to the vast scientific advances made there, particularly in the realm of diabetes research, for which the senior Robert Russell Bensley won a Banting Medal. He graduated from Hyde Park High School and went on to earn both an undergraduate and master’s degree in journalism from Northwestern University. During his years there, he commuted daily from Hyde Park, as he was also caring for his grandfather.

Russ’ career began in radio, eventually landing him at the WBBM-TV station, where he wrote and anchored the late-night news broadcast. Amusingly, this broadcast was watched by one Pat Bannon while sitting at Wally’s Tap in Homewood; she would meet him in person and then marry him almost 20 years later. Russ made his national news television debut doing “man on the street” interviews following the death of JFK.

The CBS network then brought him to New York, quickly making him a producer (eventually executive) of the Evening News with Walter Cronkite. In 1968 he took a crew to cover the Vietnam war, got shot, and then evacuated to a hospital that was then bombed.

In 1971, he won the first of four Emmy awards for his work on the groundbreaking documentary, “The World of Charlie Company,” for CBS.

After his time on the evening news, he headed the Special Events Unity, covering events like space shuttle launches, royal weddings, and presidential conventions and elections. He recently told his family he loved special events because he wanted to be where the action was. He was the executive producer of On the Road with Charles Kuralt, which he enjoyed for the interesting and uplifting stories. He also taught journalism courses as a guest teacher in a variety of settings, including Columbia University, New York.

After his retirement from CBS in 1985, he, Pat and daughter Vicki moved to Niles, MI, where they raised Morgan Horses until 2003. When asked about what seemed like a major life change, Russ was frequently known to quip, “It’s just a different kind of manure.” He continued remote work for CBS for almost 3 years, putting together a videocassette series, The Vietnam War with Walter Cronkite.

After horse-farming, he took up his favorite title full-time-Grandpa. Russ and Pat moved to Homewood, IL (where Pat had grown up) in 2003, and he remained there until 2014, when he moved into the home his daughter, Vicki, and husband Ryan built for them. He enjoyed the rest of his years in the “west wing” with Vicki, Ryan, his grandsons Andrew and Ryan, and a variety of cats and dogs whom he adored. His grandsons clearly benefited from his constant presence; both have gone into journalism.

Russ celebrated his 84th birthday by jumping out of a “perfectly good” airplane, handling it like a pro, and at 86 had to have an amputation of his lower leg (unrelated to the jumping out of an airplane) proceeding to put everyone in rehab – including 30-year-olds – to shame. (Upon waking from surgery being asked how he was, he replied, “Footloose and fancy-free.”) He walked at home without so much as a cane, and used a walker only at the annoying insistence of his daughter. Until the stroke that disabled him seven weeks prior to his death, he took daily walks, got his own paper and did the crosswords, all while shaking his head at the changes in TV news.

Russ’ colleagues say he was among the best in the business, and to this day speak with great admiration and affection for him and his work. Giants in the industry have described him as “one of the all-time great television news producers and editors” and “the best newsman television ever had….[and] that for a few years a lot of Americans got their information about what was going on in the world from the honest and direct way [he] chose to tell them.”

Russ’ kind heart was even bigger for animals. If you are inclined to honor him in some way, please make a donation in his name to the South Suburban Humane Society, where many of his beloved pets came from. If you want to honor him another way, sneak some Oreo cookies and perhaps a good, dark beer.

And above all, the family encourages you use the phrase he was famous for as often as you can – “Everything is Going to be All Right.”