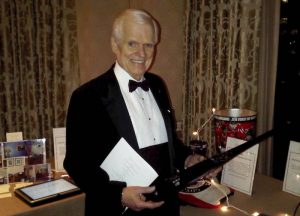 Roy Wiley worked in advertising and public relations for more than four decades after starting out in journalism and for many years was the chief spokesman for Navistar, the truck and engine manufacturer.

“He was a very positive, energizing kind of person, and he would hang around often times people half his age, but he had more energy than they did,” said Dan Ustian, a retired chairman and CEO of Navistar. “He knew everybody.”

Wiley, 87, died April 4 at Northwestern Memorial Hospital while recovering from hip surgery, said his wife of 33 years, Bobbie Huskey. He had been a Loop resident.

Born in Chicago and raised on the Northwest Side, Wiley was the son of Charles L. Wiley, who ran unsuccessfully in the 1932 GOP primary for a Northwest Side congressional district.

In 1952, while at Northwestern, Wiley was hired as an apprentice copy clerk at the Chicago Sun-Times. He was promoted to full-time general assignment reporter two years later, and later was the paper’s auto editor, a marketing and stock market columnist and finally, the paper’s assistant financial editor, overseeing a staff of 10.

“As a metro reporter in Chicago, back in the day, he’d witnessed some harsh things, but he nonetheless loved the city deeply despite its flaws,” said former Tribune reporter James P. Miller, a longtime friend. “Roy also loved newspapering — the action and the deadlines.”

In the early 1960s, Wiley also was editor of Glenview-based Automotive Fleet magazine, a publication devoted exclusively to passenger car fleets owned or leased by industry and government.

In 1968, Wiley left the Sun-Times to take a job in public relations as a vice president at the Financial Relations Board, a financial communications agency. Wiley remained there until 1972, when he and a colleague cofounded OSLA Communications, a public relations firm that was an offshoot of Olympic Savings & Loan Association.

Wiley later was director of communications at advertising agency Weber, Cohn and Riley before signing on with the Ogilvy & Mather public relations firm in 1982.

In the early 1990s, Wiley managed media relations for clients involved in hostile merger-and-acquisition activity. Miller, then a reporter for The Wall Street Journal, recalled Wiley’s forthrightness and graciousness amid at-times contentious dealings between companies.

“M&A … isn’t rocket science, but it is precision work because a lot of money is riding on the outcome, and tiny signals can swing the price of the target company’s shares, and both sides can be tempted to sling mud at the other,” Miller said. “Not Roy Wiley, though, ever, in my experience, over decades of interactions with the guy. In a hardball business, he was old-school — somebody whose word was always, always good.”

“You could always count on Roy to have that skeptical journalist’s eye on things,” said Hud Englehart, who worked with Wiley at Hill & Knowlton. “He always knew what questions to ask or what the most insightful questions were that got us to a core insight into the community and as well into clients.”

In 1998, Navistar hired Wiley as director of communications. At Navistar, he was known for insisting on only using the stairs in the company’s Warrenville headquarters, as a way to stay fit.

“We had five floors there, and one meeting might be on the first floor and the next meeting would be on the fifth floor, and some of the people would be going to both meetings, and Roy would say, ‘Let’s walk,’ ” Ustian said. “So Roy would walk up five flights of stairs, and the young guys (with him) would be the ones that were tired.”

Wiley and his wife renovated a vintage home in Lakeview before moving to a Loop high-rise, where their neighbors included former TV reporter and Better Government Association Executive Director Andy Shaw.

“My first thought was that this is one fashionable octogenarian,” Shaw recalled. “He was still as stylish, sophisticated and urbane as he had been throughout his distinguished career — a true boulevardier.”

Two marriages ended in divorce. In addition to his wife, Wiley is survived by a son, Roy; a daughter, Cindy Wiley Hindel; nine grandchildren; and four great-grandchildren. Another son, Todd, died in 2018.