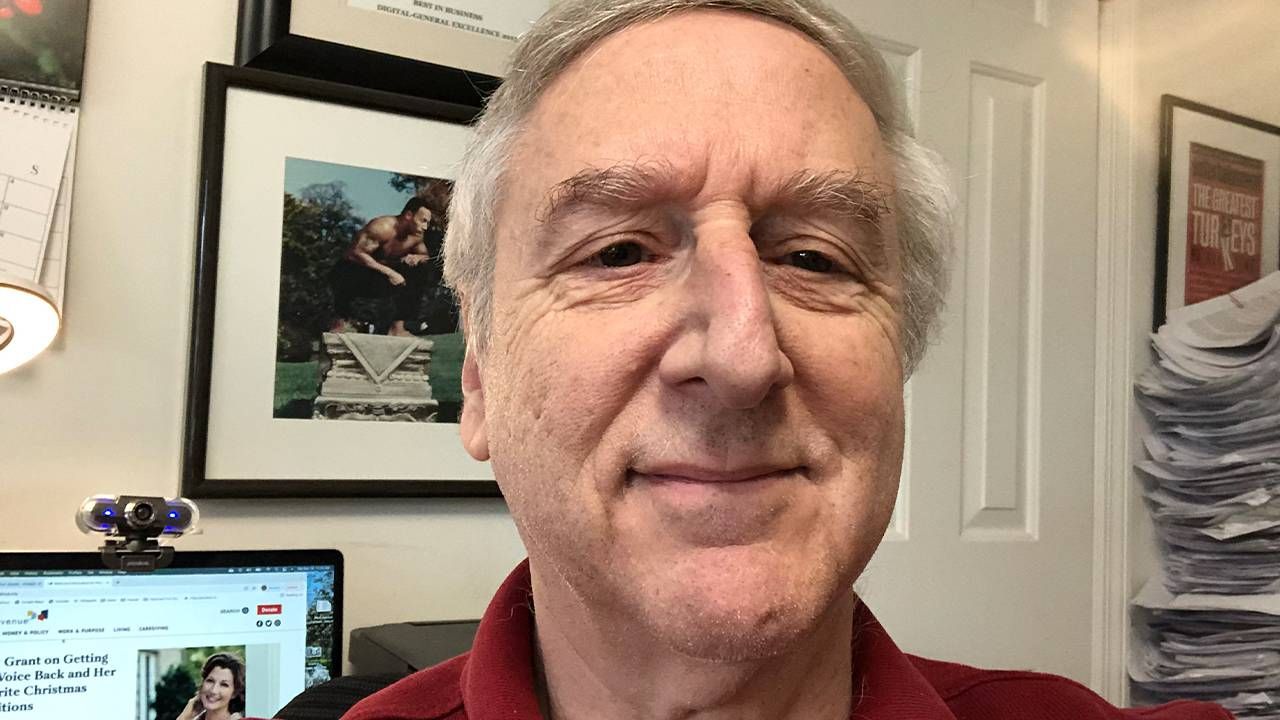 Reprinted with permission from Next Avenue. Photo credit: Richard Eisenberg

Reflections on a 10-year run, plus parting advice from what I learned as the site’s Money and Work & Purpose channels editor

After a wonderful lunch in New York City a few weeks ago with Next Avenue writers Kerry Hannon and Chris Farrell, I needed to buy a bus ticket for the trip home to New Jersey. The ticket booth clerk had posted a sign reading “Today Is My Last Day Before Retirement” and was wearing an “I’m Retired” sash, along with a huge smile. I’m about to retire, too (from my job as Next Avenue’s managing editor and editor of the site’s Money & Policy and Work & Purpose channels). Although I don’t have a sash, I did want to share a few reflections and advice as I sashay out.

Although it may seem to some Next Avenue readers that our site has been around forever, truth is that my fellow launch team members started working here just over 10 years ago — in November 2011. I was brought on as editor of the site’s Money and Work & Purpose channels.

Our small team — then split mostly between St. Paul, Minn., and the New York City area — tinkered quietly for six months, mostly to figure out what Next Avenue would be; the site went live in May 2012.

How Next Avenue Started
The idea for this journalism nonprofit was hatched by two visionaries at Twin Cities PBS (TPT): the station’s then-CEO Jim Pagliarini and his Next Avenue co-founder Judy Diaz. I was told they felt PBS should do something for boomers (then roughly 50 to 65) the way it had created “Sesame Street” for kids.

They felt PBS should do something for boomers (then roughly 50 to 65) the way it had created “Sesame Street” for kids.

I’d been a personal finance writer and editor for decades (Money, Yahoo!, Good Housekeeping, CBS MoneyWatch) and was 55 in 2011, so I felt the job was a perfect match. I was right. Over the years, my job broadened and I also became Next Avenue’s managing editor and copy editor. At a small-budget journalism nonprofit with big ideas and plans, you often wear several hats.

These days, our audience now includes Generation X, since some of them are 50-plus, too.

For the personal finance and career channels at Next Avenue, I’ve written pieces that were highly personal (“Sorry, Nobody Wants Your Parents’ Stuff” after my father died), exclusive (parts of our annual Influencers in Aging list) global (how the oldest people in the world make their money last) and arcane (everything you didn’t want to know about backdoor Roth IRA conversions). I’ve edited pieces on topics ranging from starting a business after 50 to the importance of end-of-life financial planning, too.

After turning 65 in July and realizing I was nearing my 10-year anniversary at Next Avenue, I thought the time was right to retire. At Next Avenue, we really prefer not to use that word, though, because it connotes the 1950s version of no-work/all leisure. Instead, we talk about “unretiring” — a term popularized by Chris Farrell’s 2016 book, “Unretirement.”

Why I’m Retiring Now
My decision wasn’t about the pandemic or about The Great Resignation. And I’m ignoring The Motley Fool article I just read, “3 Reasons Why 2022 May Be a Bad Year to Retire.”

I’ve just decided it’s time for me to begin the journey on my next avenue, even if, in the words of the late Stephen Sondheim, “Everybody Says Don’t.”

My retirement will be what Bruce Feiler, author of “Life Is in the Transitions,” calls one of the biggest transitions people go through. When I interviewed him for Next Avenue about his intriguing book, he told me there are three phases of transitions: The Long Goodbye, The Messy Middle and The New Beginning.

I’m now at the Long Goodbye stage, where, Feiler says, “you say goodbye to a life that is not coming back.” I’m hoping to zip through The Messy Middle (where you figure out the new transition) and quickly head into The New Beginning where, as Feiler explains, “you are unveiling your new self. It’s time to update your story and tell other people.”

Here’s how I see my New Beginning: Freelancing for Next Avenue and other sites; continuing to write book reviews for People and co-hosting the “Friends Talk Money” podcast; volunteering; mentoring; traveling with my wife and seeing our L.A.-based sons Aaron and Will and their wives (COVID-19 permitting), learning pickleball (I think it’s the law now, isn’t it?) and seeing what else comes my way — as well as what strikes my fancy.

I realize I’m enormously fortunate to be able to choose my retirement date; many others can’t, due to financial or health circumstances.

I know that, along with some boomers in their mid-60s, I’m in the last generation who’ll receive one or more employer pensions; in my case, I’ll receive two: from years working at what was once Time Inc., and Hearst.

What I Did to Help Make Retirement Possible
Following the advice I’ve offered to readers for years, I saved furiously for college bills through 529 savings accounts, mutual funds and U.S. savings bonds; I have socked away money diligently for retirement since my 20s, in 401(k)s and self-employment retirement plans; been serious about keeping an emergency savings fund; paid off our mortgage; lived pretty frugally (my wife and I drive 2010 and 2012 Mazdas, also paid off), and been cautious about debt.

My traditional Medicare, Medigap and Medicare Part D prescription drug plans will take effect in January (that’s been a hassle). I expect to delay claiming Social Security until I’m 67, taking advantage of the larger benefits I’ll receive by postponing them.

My health is mostly good, with one gigantic caveat: my kidneys are pretty lousy, due to decades with diabetes. It’s possible that I’ll eventually need a kidney transplant or dialysis, but I’m doing my best to avoid either.

My late mother had dementia and I’d be less than honest if I didn’t say that I worry I will get it one day, too. Here, I’m following the advice Next Avenue has offered — trying to stay healthy, challenging myself mentally, continuing to engage with others, working part-time and volunteering. But I also have a long-term care insurance policy, just in case, and hope the insurer will pay up if it comes to that; not all do.

Speaking of advice, I couldn’t conclude this farewell address without sharing a few personal finance and career tips for people in their 50s and 60s that I’ve picked up at Next Avenue:

Save for retirement and for emergencies. I won’t belabor this, since you hear it all the time from personal finance writers. I know it isn’t easy, and sometimes isn’t possible. But the more you can put money aside today, the more you’ll thank yourself tomorrow — whether that’s in six months or in six years.

Consult a financial adviser and an estate lawyer. My wife and I met with one financial planner when our sons were small, for tips on paying their future tuition bills (the takeaway: fund a 529 college savings plan and start when your kids are young if you can).

A few years ago, we started working with a fee-only, fiduciary Certified Financial Planner who has taken a more holistic look at our finances, offering wise counsel and recommendations on investing, insurance, taxes and debt.

We also hired an estate lawyer to ensure our final wishes will be met; that was no fun and took too much time and money, but it needed to get done.

Get lucky if you can — and make your luck, too. My luck was finding a wonderful partner in my wife Liz (married 36 years), having two fantastic, loving sons and living during years when both the stock market and housing markets soared. There were also years when both markets crashed, but I didn’t panic and waited them out.

I’d say I made my luck in my career.

After getting a journalism degree at Northwestern University and landing a job as a fact-checker at Money, I worked hard and learned all I could to allow me to move up the ranks and then land jobs at other media outlets, ultimately winding up at Next Avenue.

Part of my ability to get these jobs, I think, was networking frequently — on LinkedIn, through phone calls, emails and meet-ups — to be in the right place with the right skills at the right times.

I’ve written often, and published Next Avenue articles by experts like Nancy Collamer, about how age discrimination by employers can make it difficult for people in their 50s and 60s to get hired. I’ll always be grateful to Yahoo! for hiring me at 53 (a recruiter found my LinkedIn profile) and for TPT for taking me on at 55 (a freelancer who’d written for me told me about the job).

Brilliant experts — from AgeWave’s Ken Dychtwald to Encore.org’s Marc Freedman to authorities on elders Chip Conley and Bob Blancato to retirement gurus such as WISER’s Cindy Hounsell and Transamerica’s Catherine Collinson (all Next Avenue Influencers in Aging) — have helped let me keep my Next Avenue job by sharing their wisdom in articles I’ve written, assigned and edited.

In one of my favorite Sondheim tunes, the star of “Company” belts out the song “Marry Me a Little” saying: “I’m ready! I’m ready now!”

Today’s my last day at Next Avenue. Retirement: I’m ready!