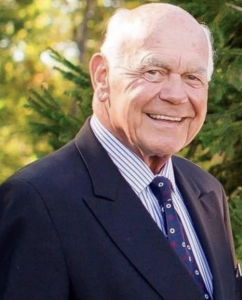 Mark Bates completed his Christian tour of duty on earth peacefully on September 19, 2022.

He was an alumnus of St. Athanasius School and St. George High School in Evanston, IL He graduated from Northwestern University with a degree in journalism in 1956

Mark married the love of his life Janet (nee Fjellberg) on January 5, 1957. They had a glorious life together until Janet’s passing on July 28, 2017. Mark is survived by his children, Mike (Sue), Scott, and Anne Glassow (Marcus).

A memorial service and celebration of Mark’s rich, full life will be held at a later date. Interment at Ridgewood Cemetery in Des Plaines, IL. The Bates family asks that memorial donations be directed to St. Athanasius School, 2510 Ashland Avenue, Evanston, IL 60201.