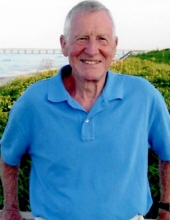 Lawrence was born July 31, 1931 in Oak Hill, West Virginia, the son of Lawrence Edwin, Sr. and Gertrude McQuade Dickerson.  He graduated from Oak Hill High School, where he played football, was a member of the track team and editor of the school newspaper, in 1950.  After graduation, unable to afford college, he enlisted in the U.S. Marine Corps.  He served as a staff sergeant during the Korean War before returning to the U.S. to attend the Marine Corps Officers Candidate Screening Course.  He was commissioned a second lieutenant in 1952 and subsequently served as a platoon leader in the 2nd Marine Division and as a company commander and instructor in the Marine Corps Infantry School at Camp Lejeune, North Carolina.

After release from active duty, Dickerson enrolled at Northwestern University and graduated in 1958 with a Bachelor of Science degree in Journalism.  At Northwestern he was president of the Alpha Delta Phi social fraternity and Pi Alpha Mu professional fraternity.  While still a student, he married Charlotte Griffiths of Canton, Ohio.

Dickerson remained in the Marine Corps Reserve, serving as Executive Officer of 2nd Battalion, 24th Marines and a regimental staff officer in the 15th Staff Group.  He and three other members of Mobilization Training Unit IL-2 were awarded a Meritorious Unit Commendation from the Secretary of the Navy.  Other military awards included the Organized Marine Corps Medal with two bronze stars, the National Defense Service Medal, the Armed Forces Reserve Medal, the Korean Service Medal with a bronze battle star, and the United Nations Service Medal.  He retired in 1981 as a colonel after 30 years of service.

Lawrence and his family lived in Arlington Heights, Illinois and Yardley, Pennsylvania before moving to Burke, Virginia.  In Virginia, he was employed by GE Aerospace, which through merger with Martin Marietta and Lockheed became Lockheed Martin Corporation.  He won a GE Systems Operation Award of Excellence in 1987 and Lockheed Martin President’s Award in 1997.

Dickerson participated in more than 1500 road races and track events, running in all 50 states and was a USA Track and Field Masters All American.  He ran on GE, Martin Marietta and Lockheed Martin track teams in corporate competition, winning several national championships as well as running the Chicago, Boston, Penn Relays, Prevention, and Marine Corps Marathons. He was also president of the Mount Vernon Chapter of the Military Officers Association of America, a Director of the Potomac Valley Track Club, a docent at the National Museum of the Marine Corps and a USA Track and Field official.