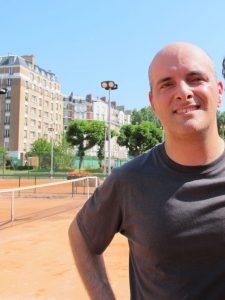 The Tom Perrotta Prize for Tennis Journalism will be presented annually to an outstanding tennis journalist under the age of 40, along with a $2,000 cash prize. Perrotta worked as a freelance sportswriter and as a correspondent for the Wall Street Journal, specializing in his passion for tennis and covering the world’s major tournaments.

“The tennis community lost a beloved member when in January 2021, Tom Perrotta succumbed to a brain tumour after a four-year battle,” Simon Cambers, co-president of the International Tennis Writers Association, said via the International Tennis Federation website. “We hope that his work and this award can serve as an inspiration to the next generation of young writers.”

Perrotta was born in Brooklyn, NY and attended North Providence High School in Rhode Island. Prior to his career as a tennis journalist, he attended Medill and graduated in 1998.

After a four-year battle with a brain tumor, Perrotta passed away on January 6, 2021 at the age of 44. He is remembered fondly by his colleagues and fellow sportswriters for his kindness and strong work ethic, which were evident even in the most high stakes of moments. Perrotta is survived by his wife Rachel Kane and sons Paul and Sean.

“He was so personally committed to helping and being generous with his colleagues,” Wall Street Journal columnist Jason Gay said. “It didn’t matter if they worked alongside him, he was beloved in the newsroom, or on the road at an event.”

“I’m so happy that this (prize) was something his family and close friends put together. Tom would be incredibly honored by it. He was somebody who was always looking to help a colleague, but also help find the next great colleague.”

More details about submissions for the Tom Perrotta Prize can be found on the ITF website.