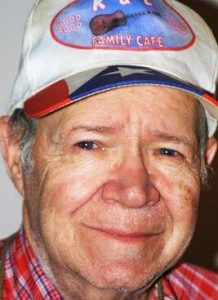 Granville loved dancing and singing and the many friends he made doing so, especially his dear friends at the Friday Night Blues.

Born August 31,1934, in Tulare, CA, he was the son of the late Buford Cooley and the late Flossie Burkett Cooley.

He graduated high school in Blytheville, Arkansas, and went on to study journalism at Northwestern University in Evanston, IL.

He worked for United Press Chicago, Herald-Palladium of Benton Harbor, Michigan, and The Journal-Standard of Freeport, IL.

He was married for six years to the former Mary Elizabeth Street, who survives of Flippin, AR, and is survived by their two children, Mark Cooley and Carmen (Mark) Watkins, both of Paris; grandchildren, Jason Rabey and Jessica (Parke) Homesley; and seven great-grandchildren: Levi, Finley, Josh, Harlie, Ezra, Lily and Ruby.

He was preceded in death by his beloved wife of 19 years, Donna Gail Rhodes Caldwell Cooley, with whom he shared a love for travel and a love for their church, First United Methodist of Paris.

Source: Published by the Paris Post-Intelligencer