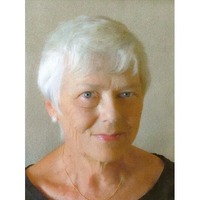 Gail Petersen Harwell, 81, passed away peacefully on Tuesday, April 26, 2022, at RiverView Care Center in Crookston, where she had been a resident since October of 2021.

She was born October 7, 1940, to Norma and Jerry Petersen at Minette’s Maternity Home in Fertile, where she also attended school, first grade through 12th. From early years, she had a curiosity for the world and would stand on the front porch and say, “Just wait for me world, I’ll get there.”

To achieve that goal, Gail was a determined high achiever in high school, which led to a full scholarship at Northwestern University Medill School of Journalism. After earning her Bachelor of Science in 1962, she launched a career as an advertising writer in Chicago. She was named a Vice President of J. Walter Thompson Company-Chicago in 1969, where she worked primarily in television, writing for such accounts as Sears dishwashers, Kraft Foods, Sunbeam, and Jovan fragrances. In 1977, she moved to Boston and Arnold & Company; in 1979 to Manhattan and JWT New York; in 1983 to Los Angeles and Evans Advertising; and in 1993 to Marin County in the Bay Area.

Gail met her husband Richard Sterling Harwell in 1971 at Great Lakes, IL, at the end of a sailing race. They were separated by geography and circumstances, but fate brought them together again 20 years later, and they were married in 1993 at Concordia Lutheran Church in Fertile.

In 1995, Gail changed careers, becoming an independent editorial consultant in the engineering-construction field. She often worked alongside Sterling; writing, editing, formatting, and producing proposals, feasibility studies, and marketing materials for multibillion-dollar construction projects. She worked in Asia, Europe, Australia, and Central America, as well as across the U.S., continuing until her final retirement at the age of 73. From that time, Gail and Sterling enjoyed a life of tennis, travel, volunteering, and relaxation overlooking San Francisco Bay. They were members of the Belvedere Tennis Club and the San Francisco Yacht Club. Gail was an avid reader, and she belonged to a local book club for 10 years.

Friends will remember her for her meticulous planning and orchestration of many wonderful birthday parties, club gatherings and class reunions.

Both Gail and Sterling will be remembered by family for initiating and maintaining the “Petersen-Harwell Perpetual Ping Pong Tournament,” complete with engraved trophy. Gail made sure the results with photos were posted in the Fertile Journal.

Family and friends recall her kindness, generosity, acute sense of humor, infectious laugh, courage, and fierce determination. She had a certain “twinkle in her eyes,” and she will be dearly missed by all who knew and loved her.

Gail was preceded in death by her husband, R. Sterling Harwell, by her older sister, and best friend, Marlys Ozga, and by an infant nephew. She is survived by brothers, Harold (Candy) of Brookline, MA, and Michael (Carol) of Fertile, and brother-in-law, Edward Ozga of Plymouth, MN, nine nieces and nephews, a host of grandnieces and grandnephews, and one great-grandniece.

In lieu of flowers, please consider a donation to Parkinson’s disease research or Hospice of the Red River Valley.