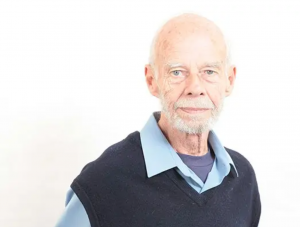 David Searl, the author of expat Bible ‘You & The Law in Spain’ which provides a step-by-step guide to all aspects of legal matters in Spain, has died at the age of 82.

Born in Ashtabula, Ohio, on the shores of Lake Erie, he studied at the Medill School of Journalism at the prestigious Northwestern University, which is where he met his wife Janet Mendel.

They both worked in Chicago’s newspapers before deciding in 1966 to take a year off to live in Spain. It was a chance encounter in a Chicago bar that led them to decide on Mijas, then a quiet hillside village above the Costa del Sol.

“We were thinking about Spain, and then one night in a bar, we heard some people speaking Spanish on the table next to us. It was an American man chatting to some visiting flamenco performers and he raved about this place Mijas where he had spent some time in Spain,” Janet recalls.

“Based on that conversation, the very next day we decided that Mijas was our destination,” she told the Olive Press by telephone.

The pair took a freighter across the Atlantic to Casablanca, then a rickety bus to Tangiers before crossing over the Straits of Gibraltar from Morocco to Spain’s Algeciras. “We arrived in Mijas by taxi where we lived pretty well on our savings. We had intended on only staying for a year, but well, things didn’t turn out like that.”

After a year-long stint teaching at an American school in Switzerland, the pair returned to Mijas and made it their permanent home, buying a plot of land and building their home, where Janet still lives.

It was here that they raised their two boys, Daniel and Benjamin, and forged writing careers, with Janet focusing on Spanish food and David on legal issues affecting the expat community as well as freelancing as a foreign correspondent.

He was sent down the coast to Palomares to report on an incident that saw American nuclear bombs dropped accidentally from a B-52 in 1966 as well as by a Canadian newspaper to follow up on a rumour that then Canadian prime minister Pierre Trudeau was holidaying with a mistress in Spain.

David and Janet separated in the mid-1980s but both stayed in Mijas where David met artist Mary Eisman, who became his partner for the rest of his life.

He also went on to write 24 editions of what became the expat must-read on all legal matters, a book that appears on the bookcases of expats across Spain.

“He was an impish character with a whimsical sense of humour,” recalls former colleague and Costa del Sol journalist David Baird. “As I understand it, he began contributing to Lookout, which at that time was required reading for expats here in the 70s.”

“The editor, Ken Brown, asked him to answer some of the queries received relating to Spanish law that affected expats. Thanks to his investigations and consultations with lawyers, gestores and tax advisors on the Costa, his knowledge grew until he was something of an expert. He began writing a regular column in Lookout answering readers’ queries about everything from residence requirements to driving licenses.”

“In 1985 with his accumulated knowledge, he compiled the book ‘You & the Law in Spain,’ published by Santana Books. This became what the Times declared was ‘the Bible for foreigners in Spain,'” said Baird.

Another former colleague and foreign correspondent Edward Owen remembered: “David happily advised foreign journalists in Spain who were often covering gruesome stories involving their own countrymen who were caught up in property scams, home seizures and expensive legal tangles.”

“David was a charming and amiable colleague who did not seek to hugely profit from his valuable work. He enjoyed helping others and beating the oft-changing system. At Lookout’s famous lunches in Fuengirola, he would often regale the throng with tales of woe – and how he had helped yet another Brit get out of jail or regain ownership of his villa.”

Searl had the ability to write about complex Spanish legal matters in plain English that was easy to understand, and his work was also translated into French, German and Russian.

Up until his death, Searl was working on the 25th edition, which was to be published later this year.

He was also an active member of his community and regular guest on local radio as well as advising the Foreign Residents’ Department at Mijas Town Hall and other local community groups.

He died on March 18 at the age of 82 and leaves behind Mary, his two sons and three grandchildren.