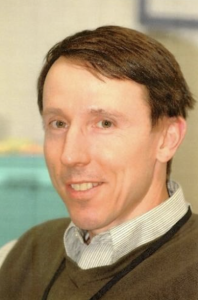 Charles Gallup ‘Chuck’ Williams passed away Friday June 3, 2022 after experiencing a catastrophic brain hemorrhage. With his wife and daughters by his side, Chuck left for the great squash court in the sky while being serenaded by Neil Young, Bob Dylan, and the Grateful Dead.

Chuck was born in Bridgeport, Conn., as the first son of Arthur Collins Williams and Mary Helen Mitchell Williams. He followed his older sister, Kit, and had two younger brothers, Bill and Doug. Their childhood was full of little league, bikes, golf, tennis, and skiing in Vermont. Chuck attended elementary and middle school in the small town of Fairfield, Conn., and then left to attend high school at Andover in Massachusetts. Chuck went on to earn a bachelor’s of arts degree in history in 1973 at the University of Rochester, where he also played squash and soccer and developed a taste for Genesee Cream Ale and the Garbage Plate from Nick Tahoe’s. Chuck earned a master’s degree at the Medill School of Journalism at Northwestern University in 1974.

He began his career as a freelance writer in Rochester, N.Y., where he wrote for several publications including the Brighton Pittsford Post. Chuck was then employed by the Cancer Center of Strong Memorial Hospital, starting a long career in public relations and communications for health care systems. While working in Rochester, Chuck met Jackie Wygant and in his usual unhurried fashion waited a year to ask her out. Two months before their wedding in 1979, Chuck competed in the U.S. Squash National Championships at the Multnomah Athletic Club in Portland, Ore., and while there was invited to apply for a job at O.H.S.U. Jackie said no. 10 months later, they made an epic cross country trip in a U-haul and arrived in the Pacific Northwest, the place that would become their forever home. The PNW, in turn, welcomed them with a layer of ash from the eruption of Mt. St. Helens shortly after they arrived. The couple immersed themselves in a multitude of outdoor activities, including mountain climbing, cross-country skiing, camping, hiking, and soaking up the sun at the Oregon Coast. Kidding, they learned it is almost never sunny at the Oregon Coast!

In 1982, the couple’s first daughter, Laurel, came into the world. Chuck continued working at O.H.S.U. and Jackie fondly remembers passing the infant through the window into his office so he could watch her while she played squash. Chuck started working at Good Samaritan Hospital in 1985, and soon after the couple’s second daughter, Kendra, joined the family. Luckily for her, she entered and exited the hospital through the regular doors.

Chuck continued his career in public relations at Shriners Hospital from 1992 to 1999. He then worked as the regional director of Kids in a Drugfree Society (K.I.D.S.) for a year before going on to work at Providence Health System. He worked at Providence from 2001 to 2012 in Public Affairs and Internal Communications and was the editor of the Spirit Newsletter. Chuck finished his career at CareOregon where he worked until he retired in 2017.

Chuck loved to hike and camp and shared his love of the outdoors with his daughters including taking each for their first summit at Saddle Mountain around 8 years of age. Chuck also passed on his competitive spirit, coaching his daughters in soccer and softball, and cheering them on in countless other sports.

While helping to raise his two daughters and working his full-time job, Chuck continued to be a competitive squash player, achieving number 6 in the nation in 40+ softball singles. He also taught squash and organized tournaments.

Chuck founded a local accreditation program for the Portland Metro Chapter of Public Relations Society of America (PRSA) and served on its board, including as President in 1997. In 2000, he was honored with their William W. Marsh Lifetime Achievement Award. He also served on the boards of many other non-profit organizations. While working and volunteering, Chuck forged close ties with many members of the local print, radio, and television media. In addition, Chuck was an enthusiastic mentor and encouraged many aspiring public relations professionals. At last count, there were over 200 people who were mentored by Chuck while seeking their APR accreditation. Chuck loved his career and made lifelong friends at every job and every organization he was a part of.

A celebration of life will be held later this summer in Portland, Ore., and Chuck’s final resting place will be in his beloved Landgrove, Vt. In lieu of flowers please send donations to PRSAOregon.org for the APR Accreditation Education Fund, Street Roots, Nursingale, the Oregon Stroke Center at OHSU, Friends of the Historic Columbia River Highway, or the Oregon Natural Desert Association.