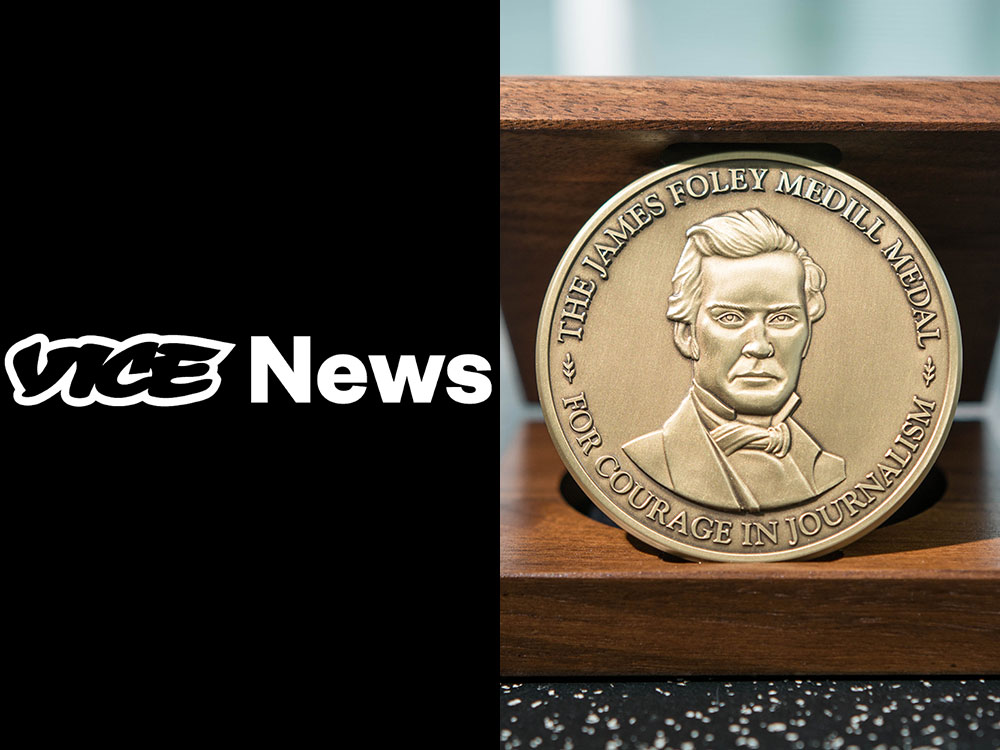 VICE News reporters Isobel Yeung, Zach Caldwell, Mahmud Mousa, Jackie Jesko and Tarek Turkey have been awarded the James Foley Medill Medal for Courage in Journalism for their coverage of the human rights crisis in Idlib, Syria’s last rebel-controlled province, during the

country’s ongoing civil war. Their report, “Battle for Idlib,” a segment from season one of VICE on Showtime, paints a tragic picture of the recent increase in bombings by Syria’s government and its Russian allies.

“There was some truly impressive work submitted for this year’s Foley Award. However, the reporting that Isobel Yeung and her colleagues at Vice News did in Syria rose above the rest,” says judge Brett Pulley (MSJ87), Bloomberg’s Atlanta bureau chief and Medill Board of Advisers member. “Their story of the battle for the last rebel stronghold in Syria is compelling, gruesome and heartbreaking. With Yeung leading the way, they put themselves on the ground in the most dangerous area of the country, amidst chaos, rebel militias and artillery fire, and courageously delivered a report that detailed the government’s bombing of the region and the humanitarian crisis it has created.”

Through a combination of interviews, flight data and cockpit recordings, Yeung and her team proved that government-issued airstrikes were deliberately targeting unarmed civilians, and were doing so with high-tech backing from Russian air support.

“Isobel Yeung and her team braved fighter jet and drone attacks in Idlib to tell the devastating story of Syrian government warfare against its own people, including children,” says judge and Medill faculty member Ceci Rodgers. “Their story was as impactful as it was immersive.”

The bravery demonstrated by Yeung and her colleagues embodies the spirit of Medill alumnus James Foley, the award’s namesake, who was captured while reporting in Syria in 2012 and killed by ISIS extremists in 2014.

“Her interviews with children reminded me strongly of James Foley’s reporting from Libya and Syria,” says judge and Medill Professor Ellen Shearer, Washington bureau chief and co-director of the Medill National Security Journalism initiative. “He felt it was so important for journalists to show the cost of war on the civilian population. Isobel reminded me of Jim in her passion for the truth and compassion for the people.”

Since the segment’s publication, Yeung’s team has been contacted by the United Nations and human rights organizations to provide first-hand testimonies of the war crimes they witnessed so legal action can be taken in international courts.

This year’s honorable mention also won high praise from the judges. In “When can we really rest?” published on April 2, 2020 in The California Sunday Magazine, Nadja Drost crossed the Darien Gap with fellow reporters Bruno Federico and Carlos Villalón, who contributed photos to the story.

Named for the 66-mile break in the Pan-American Highway, The Darien Gap is roughly 10,000 square miles of dense rainforest on the border between Colombia and Panama. Drost and her colleagues walked 4 to 6 miles a day alongside groups of migrants from Cameroon, Pakistan, Ghana, Haiti, Sri Lanka, and Bangladesh. The reporting project was supported by the Pulitzer Center, and included a series for the PBS NewsHour by Drost and Federico.

The team put their lives in the hands of smuggler guides in an uninhabited, remote region, facing many of the same risks migrants did, including frequent assault, armed robbery, food shortage, drowning and even murder.

“It was chilling to find out that pretty much every group that was ahead of us or behind us had either been robbed or sexually assaulted,” Drost says. “There was a moment near the end of the trip when I realized this was a really bad situation. People had not eaten for days and days. We have to get out of here by tonight or tomorrow, maximum.”

About the James Foley Medill Medal for Courage in Journalism

The medal is given for work published during a calendar year to an individual or team of journalists, working for a U.S.-based media outlet, who best displayed moral, physical, ethical, financial or political courage in the pursuit of a story or series of stories.

The 2019 award was given to Azam Ahmed, New York Times bureau chief for Mexico, Central America and the Caribbean, for his 2019 investigation of gang murder across Latin America. In his series “Kill, or Be Killed: Latin America’s Homicide Crisis,” Ahmed chronicled the rampant and unchecked gang violence in the region.