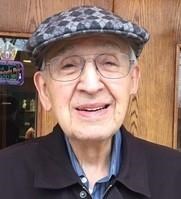 The world just got a little quieter. Sam H. Saran passed away at the age of 97 on Feb. 1, 2021. He began his career in journalism and remained curious about everything until the very end. He never lost the impulse to report…on everything from family doings, the weather, the logistics of any trip you might be taking, and the market to current events. Most conversations began with, “So what can you tell me today?” “Sam the family man” survived both wife Dena (Chiodras) of 48 years, with whom he had three children, and Thora (nee Clark) who passed away in September. He was loving Father to Don (Margie), Linda (Roy) and Laurie (Angelos), and beloved Papou to grandchildren Thomas, Effie, Marina and Dena.

An only child, he began supporting his parents at the age of 12. He lived in Chicago his entire life, except for 3 ½ years of service in WWII where he was inducted into the U.S. Army Air Force in World War II, and later transferred to serve as a B-29 Bombardier with the 346 th Bomb Group on Okinawa. He separated as a First Lieutenant in 1946. With the G.I. Bill, Sam completed both undergraduate and graduate degrees at Medill in 3 ½ years, while working part-time as a typesetter with the printer who gave him his first job, following graduation from Lane Technical High School in 1941.

A 40-year veteran Chicago broadcast news writer, reporter, commentator at NBC News, Sam began his career as financial news writer-editor. During his 13 years with NBC, he produced news documentaries, and delivered newscasts on local and network programs, specifically for a nightly radio stock market and business report and a weekly television series, “Invest in America”. He also served as reporter-at-large for the WMAQ series, “Night Desk”, and on numerous NBC network news assignments including the national political conventions of 1956 and 1960. In 1959, Sam wrote, produced and directed an hour-long television documentary on the first anniversary of the tragic Our Lady of Angels school fire, “It Must Never Happen Again.”

As a financial broadcaster he was cited as Man of the Year in 1960 by the Stock Brokers’ Associates, and also was cited by the Chicago Federated Advertising Club and the American Bankers Association. Among the dignitaries/celebrities Sam interviewed during his years: Senator John F. Kennedy, (TV City Desk), Maria Callas (News on the Spot), Al Capone, Mayor Richard Daley, Elizabeth Taylor and others… While a public relations executive at Northwestern University, Sam secured two major gifts to the University’s Evanston campus—the O.T. Hogan Biological Sciences Building and Nathaniel Leverone Hall in the Kellogg School of Management—from two CEO guests who appeared on his TV broadcasts.

For 22 years, he served as Director of Corporate Communications/Assistant to the CEO for Inland Steel Industries, Inc. In 1968, he was cited by Institutional Investor magazine, the leading financial analyst publication, for the best industry report for nine consecutive years, a distinction held by only three other companies. By today’s standards, Sam would have been labeled a “foodie”. Having grown up with Greek immigrant family/friend grocery merchants, one of his first jobs was stocking in a grocery store. During the Pandemic, very detailed grocery order lists were dictated and inventoried after picking them up in the car he purchased only a year ago or, later, when being delivered. We could always count on a performance review! Sam was a lover of music and a jazz aficionado, enjoying his Saturday and Sunday lunches to Big Band and other standards from the Greatest Generation era. In later years, he viewed services from Christ Church, Oak Brook, where he was where he was a member for decades. He also had a passion for golf, which he enjoyed throughout his adult life. With this, his last report is filed.