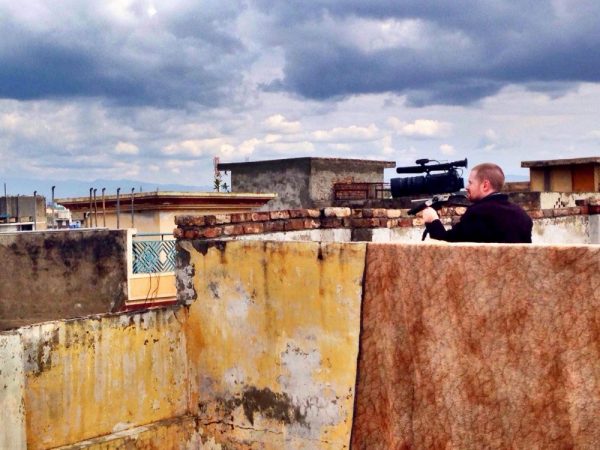 Medill professor Brent Huffman never shies away from touchy topics as a documentarian, and his most recent work on Uyghurs in Pakistan is no exception.

“I’m attracted to difficult projects. And this one is an extremely difficult one,” he says.

In addition to being a working documentary filmmaker, Huffman teaches documentary theory and production at Medill. His short-form documentary “Uyghurs Who Fled China Now Face Repression in Pakistan” was posted to the VICE News YouTube channel on March 3. It has since garnered over 150,000 views.

Uyghurs are a predominantly Muslim ethnic group native to the Xinjiang region of China. The Chinese government has reportedly detained over 1 million Muslims, the majority of them Uyghurs, in so-called reeducation camps, an act the United States has declared genocide.

Huffman’s documentary shows that the oppression of Uyghurs doesn’t end at the Chinese border. Those who have fled to nearby Pakistan are also victims of violence, persecution and cultural loss.

Huffman was led to this topic by following a thread from his previous work, the acclaimed 2014 documentary “Saving Mes Aynak,” which tells the story of Afghan archaeologists working to save an ancient city from destruction by a Chinese copper mine. That mine was a part of China’s Belt and Road Initiative, a modern reimagining of the Silk Road in which Pakistan is a key player.

“In some ways, the persecution of the Uyghurs is part of this massive economic project,” Huffman says.

He was also drawn to the issue because of its challenging nature.

“A lot of the stories I’m attracted to are human rights stories or social justice stories, but they’re also stories that, you know, people tell me they can’t be told. ‘It’s too difficult, too dangerous, no one will talk to you, you can’t do this,’” he says. “I have some dysfunction in me that, instead of listening to that, that makes me motivated, and it makes me passionate and makes me feel like, ‘Well, then, you know, that’s my role. I have to tell the story, right?’”

So far, Huffman has traveled to Pakistan five times to film. Each time, he’s faced roadblocks including acquiring work visas, filming in restricted locations like the Confucius Institute in Islamabad, and connecting with hard-to-reach sources like controversial Chinese politician Zhao Lijian.

“Every subject was just extraordinarily difficult to get on camera, to give me permission to talk to them,” he says. “Part of these films is just not giving up, even though all these doors are constantly slammed in your face.”

One particularly fraught aspect of covering such a volatile topic is protecting vulnerable interview subjects. Being featured in a documentary could put Uyghurs in Pakistan at risk, but they appear in the film because Huffman says it’s essential that the Uyghurs have a voice in their own narrative.

“I’m trying to facilitate this way for them to have their story heard,” he says. “That’s the trick: keeping them safe, but keeping that emotion so audiences can relate to them and feel something for this really tragic story.”

The video released by VICE News is about 20 minutes long, but Huffman plans to complete a full-length version of the documentary once filming can safely resume given the pandemic. Raising awareness of the Uyghurs’ plight is incredibly important, he says.

“This is a genocide that’s occurring, and people need need to know about it. I just hope this is a way to introduce audiences and, again, get them emotionally invested in the subjects and get them to care and get them to want to help. I think that’s my biggest goal,” he says. “It’s an incredible privilege to be able to meet these subjects, to be a part of their lives and to be able to help tell their stories.”