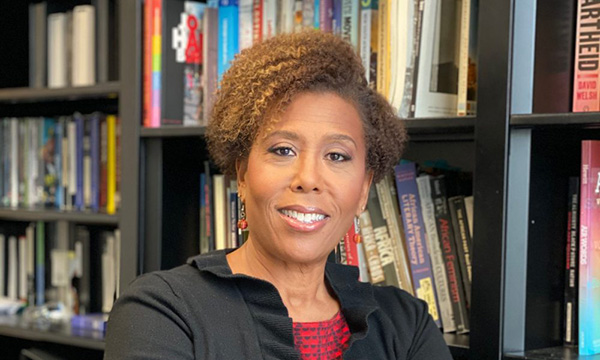 Apartheid may have taken place in South Africa more than 8,000 miles from Chicago, but the two locations, their activism and their social dynamics have much in common. This is the phenomenon Medill professor and alumna Ava Greenwell (BSJ84, MSJ85) set out to capture with her thought-provoking documentary “Mandela in Chicago.”

Greenwell’s film premiered on WTTW on February 14. It tells the story of Nelson Mandela’s 1993 visit to Chicago and its repercussions, but more broadly, it explores the connection between Chicago and South Africa in terms of activism, racism and power.

The documentary includes fascinating archival footage, as well as interviews with Chicagoan and South African activists.

“I want the people who were on the ground to be able to tell their own story instead of having somebody else narrate it,” Greenwell says. “You know, so often there are documentaries out there about a group, but members of that group don’t get to have a say in how that story gets framed.”

Greenwell was inspired to create the documentary after taking on the role of co-director for Medill’s South Africa Journalism Residency Program.

“My predecessors would occasionally bring in people from the Chicago area who had connections to South Africa. And it really got me to thinking about, well, what was the Chicago connection here?” she says.

The Chicago connection runs deep, it turns out. In speaking to local activists, Greenwell discovered a little known history, including the travel of enslaved African Americans to South Africa as sailors and performers in the 19th century, and South Africans boarding in Chicago in the 20th. This research arose, in part, from Greenwell’s time in Northwestern’s African American Studies graduate program.

“A lot of the readings and a lot of the work I did in the doctoral program in many ways informed my interest in the historical aspect of this era and this time,” she says.

Greenwell approached the film not just as a Northwestern alumna, but as a Medill professor. Many of Greenwell’s students helped with the film by providing transcriptions, footage and other work.

“Where possible I tried to involve as many Medill students in the project as possible, because I felt as though it’s not just my work, but it’s the work of the entire Northwestern community,” she says.

Northwestern is present on camera as well as behind the scenes. Many of Greenwell’s interviewees have affiliations with the university or other academic institutions, having become education professionals since working as activists in the ‘90s. She refers to these subjects as scholar activists.

“In some ways, it shouldn’t be that surprising that a lot of these people who were so interested in anti-apartheid and what it took to eliminate it were also studying. They were students of the movement, if you will,” she says. “A lot of what they had to do to really get Chicagoans to take notice, is they had to teach.”

Greenwell hopes that the documentary can reintroduce the story of apartheid activism and its principles to a new generation of Northwestern students and Chicagoans, and for them to form connections with South Africans across the Atlantic.

“I would love to have this film be a catalyst to reignite interest in each other, and also begin to think about, how can we finish the work that was started?” she says. “You know, how can we think about all the economic inequities that still exist, both in South Africa and in the United States, and begin to work on solving those problems?”

Ultimately, “Mandela in Chicago” is a love letter to Chicago’s activists, and a testament to the power of journalism as storytelling.

“Don’t wait to tell your story. Now is the time,” says Greenwell. “And when you tell it, knowing that you can tell it from your own perspective is just ever so gratifying.”

“Mandela in Chicago” is available now on WTTW.