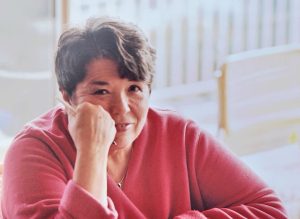 Gordon was born in Dixon, Ill. While in high school, she attended the Medill Cherubs summer program. After graduation from Aurora High School, she was awarded a scholarship to attend Northwestern and would go on to have a lifelong affiliation with the University. She earned undergraduate and master’s degrees from Medill and then a Ph.D. in sociology, also at Northwestern. She later served as a professor at Medill and, from 1980 to 1988, as director of the Center for Urban Affairs.

Between her various degrees, she spent three years in Nsukka, Nigeria with her first husband, Halfdan Johnson. While there, Margo helped students at the University of Nigeria start a student-run newspaper, the “Nsukka Record,” the first of its kind. It is still published today as “The Record,” a major national Nigerian newspaper. She also lived for a year in Aarhus, Denmark and worked as a reporter and editor for the Chattanooga Times and the St. Petersburg Times before returning to Evanston to complete her Ph.D.

In one of her classes, she met Andy Gordon. They married soon after and both went on to spend nearly 20 years as professors and, in Margo’s case, as a university administrator, at Northwestern. During that time, Margo authored or co-authored several books, including the widely acclaimed “The Female Fear” and “The Journalism of Outrage: Investigative Reporting and Agenda Building in America.”

In 1989, Margo and Andy were recruited to the University of Washington. Margo became Dean of the Graduate School of Public Affairs (now known as the Evans School), which she directed until she retired. She was inducted into the Medill Hall of Achievement inaugural class in 1997.

Margo will be remembered for bringing out the best in people and figuring out how to support them as a friend, professor, university administrator, dean or family member.

“She left no doubt with her friends and family how much she cared about them and was always her authentic caring self,” says Andy. “Margo really did have a twinkle in her eye and an enthusiasm that was infectious. She was also tenacious and fought fiercely on behalf of journalistic values, including at the Center, where an interdisciplinary team she pulled together co-authored a book on investigative reporting,” he adds.

“From the time of my recruitment until Margo left Northwestern, she was a mentor, colleague, co-author and role model for me,” says Medill Emeritus Professor Donna Leff. “She brought me in to the Center for Urban Affairs and led a communications research group there that produced coauthored work in journalism and policy—media influence in setting social and policy agendas. Margo’s seminal early work identified the connection between media coverage of rape and the way victims of sexual violence were treated by the criminal justice system and by society more generally.” Leff adds, “Her husband Andy is right—everyone liked the always smiling Margo.”

Medill Associate Professor Emeritus George Harmon was on the full-time faculty with Gordon from 1980 to when she left for Washington. “Anyone who met Margo knew instantly that hers was an incisive and inquisitive mind, interested in nearly everything,” Harmon says. “She was a delightful, supportive colleague on the faculty. Perhaps best of all, she was constantly cheerful.”

Margo is survived by her husband Andy, children Sarah (Scott) and Seth (Bootsy), brother Joe (Barbara), grandchildren Carenna and Drake, and many wonderful friends and family members. Her family is grateful that they were able to be with her in her final days despite COVID-19.