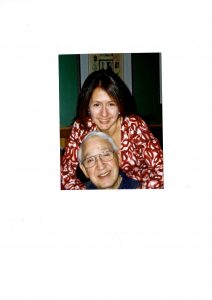 My Father was a complex man.  Unlike most of us, who try to conceal our flaws, he wore them prominently and proudly on his sleeve.  Who you saw was who you got.

He was a professional’s professional.  In the journalism world, he was the logistics reporter for any story he covered, never wavering in the chaos.  In the corporate world, he was the eye of the storm in a crisis.  He never shied from making decisions and doling orders.  The many accomplishments throughout his colorful career are summarized in his obituary.

Here, I will focus on, and celebrate, “Sam the Family Man”.  He and my dear mother Dena provided support to four generations.  As the children of immigrants, they gave to the best of their ability.  They always looked for needs and tried to fill them.

My Father showed, and stepped, up in any number of ways:  chief copy editor, career counselor, math tutor, 4th of July bike decorator, and letter writer on birthdays, holidays and during college years.

And then there were the fun and funny moments.

One Easter we opened what looked like a wooden toolbox, only to find a white poodle puppy, Si-Bon.  When we were little, we got airplane and horseback rides or, we got carried through the house while he called out something silly.

We had the blessing of watching him do the same with his grandchildren Thomas, Effie, Marina & Dena.  He loved to get down on the floor and give them horseback rides, build all kinds of architectural buildings, including the Acropolis, churches, libraries, the Arlington Race Track and whole little communities.  He loved practicing golf with them on the putting mat and looked forward to the annual fishing outing at Luther Village in Arlington Heights.  If my sister Laurie was in town, she had the dubious honor of preparing the hooks!  He taught the grandchildren the Greek alphabet, numbers, and many words.

One of my fondest memories is Saturday mornings in Sauganash.  Each Saturday, Dad would record his financial program from our den.  Laurie and I would beg to come in and he would let us, provided we were quiet.  Each Saturday, all it would take was one look, one mouthing of some provocatory sentence or one poke and the giggles would set in, uncontrollably.  Of course, they started silent, then rumbled through our bodies until they gasped out into the air.  We got a few “takes” and eventually, were dismissed.  Until next Saturday.  I’ve no idea how much time our shenanigans added to his process, but it sure was fun!

Another fond memory is of the Winter hockey playoffs.  Dad, my brother Don and I would follow the Chicago Black Hawks.  We had our own playoff on the tabletop game set up on the oversized marble coffee table in the den.  It was very competitive!  My parents were way ahead of their time in not limiting any one of us by gender.  So, I leaned in and played my little heart out and nobody let me win.  Yet, sometimes I did!  As I look back, that was a great training ground for many of the corporate antics I would later encounter throughout my career.  Dad supported Don’s hockey sport, which he took up.  Sometimes, they would skate at the park together.

They also shared a passion for music, particularly jazz.  All three of us took piano lessons, but Don was the gifted pianist.  Dad put on album after album and Don could start playing the piece by ear.  Mom played the piano, too.  Although Dad early dabbled at the guitar, he had always wanted to learn to play piano.

Dad always took an interest in Laurie’s and my musical ventures, our church and other choral groups, Laurie’s musicals and theatrical performances, and my CD’s recorded for Roy.  He also supported my artwork endeavors.  Laurie and Dad enjoyed watching all kinds of sports together, and once attended the Western Open Golf tournament.

As Greeks, we were all about our food, food, food!  Sunday after church meals at restaurants with our cousins and family friends.  Lockwood Castle sparklers for our birthdays.  Lou Malnati’s pizza.  Biasetti’s hamburgers.  Greek lamb wrapped in white paper at Easter, with the best feta and bread.  Coffeecake for Sunday breakfast.  Homemade Greek delicacies.  The funniest holiday tradition was at the Thanksgiving table, which was packed with our cousins and a few of my college friends who couldn’t get home.  We would take turns telling jokes just as a friend was taking a bite of the Kourabiedes…and wait for the powdered sugar to fly!  Tough crowd…

Our family saw much of the U.S.A, sometimes in a Chevrolet and other cars, and by plane.  Many vacations spent in Estes Park with our cousins and other family friends…California, the East Coast and others.  Among our most memorable in the early ‘60’s:  I was about five when we flew to New York.  Our sedan rental ended up being a mustang, which barely accommodated the five of us and our luggage.  It was unbelievably hot with no air conditioning.  Bodies and bags filled every square inch of that sports car.  It was on that trip that I developed my love of red MGs.  Back in the day of non-hovercraft parents, mine let cousin Zoe and her boyfriend, Tony, “adopt” me for the week, taking me to the beach, for subs and the carnival all in…you guessed it…Tony’s red MG.  We Sarans are all about our cars.  Dad purchased his last one in January 2020 and drove it to pick up his Mariano’s groceries just months before his passing.

One of our most memorable family vacations almost didn’t happen.  In 1984, I had tickets to join my parents in Greece, where they were celebrating their anniversary.  I got the idea to have Don and Laurie come as a surprise.  We hustled to make it happen.  I remember Don and I scrambling downtown to get his passport.  We barely made it in time for the flight, where Laurie was waiting for us.  Not to sound archaic, but that pre-dated cell phones so all of this drama happened with out communication or updates!  I asked my parents to meet me outside their hotel.  I remember walking toward them and, just as we met, Don and Laurie casually stepped out from behind a tree into our path.  They were shocked!  Of course, it never occurred to us we could give one of them a heart attack!

Among my fondest memories are of watching my parents dance, which they did any chance they got.  They could cut a rug with the best of them and lit up the dance floor!  They would both beam as they moved in synch with ease.  Now that Dad also has received his “angel” wings they’re doing a different kind of dance.