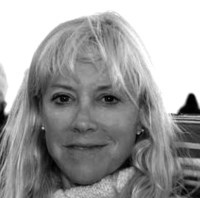 She was born Aug. 7, 1959, in Orange Heights, VT, the daughter of Harry and Barbara Holland of Hanover, NH and Vero Beach, FL. Judy was born in the family station wagon en route to the hospital, portending a life in constant motion. From a very young age, Judy adored books and kept a flashlight under the bed covers to read at night. She also displayed an early aptitude for performance and enlisted neighborhood children to put on shows in the family garage with a blanket as stage curtains. She later became an accomplished figure skater and continued to perform in college and as an adult.

She attended Hanover High School and graduated in 1977. Her first summer job was as a cashier at Dan & Whit’s General Store on the same block in Norwich, VT where she grew up. She continued her education at Middlebury College, where she graduated with a BA in 1981. From there, Judy taught English at a boarding school in Germany and studied Italian in Florence, becoming fluent in both languages. She worked as a paralegal in a New York City law firm before earning her master’s degree in Journalism from the Medill School of Journalism at Northwestern University in Evanston, IL.

During her 30-year journalism career, Judy was a newspaper reporter at the Valley News Dispatch in Tarentum, Pa. and the Tampa Tribune in Florida before moving to Washington, DC to become a Capitol Hill correspondent for States News Service. She spent 13 years covering the US Senate and as national bureau editor at Hearst Newspapers, the storied newspaper chain that includes the Houston and San Francisco Chronicles and the Boston Globe. She won the Hearst Eagle Award, the chain’s highest honor. Judy was elected president of the National Press Club Foundation and was a member of the Capitol Speakers Club. She also appeared as a political commentator on cable TV news. Her stories appeared in dozens of publications.

She also was the founder and editor of parentinsider.com, an online magazine about parenting teens and wrote the book and podcast series HappiNest: Finding Fulfillment When Your Kids Leave Home.

Judy met her husband John K. Starr, an orthopedic surgeon, in 1982, when he was a medical student. They were together for nearly 40 years, married since 1990. Her true pride and joy were her beloved children, whom she taught determination, poise and empathy.