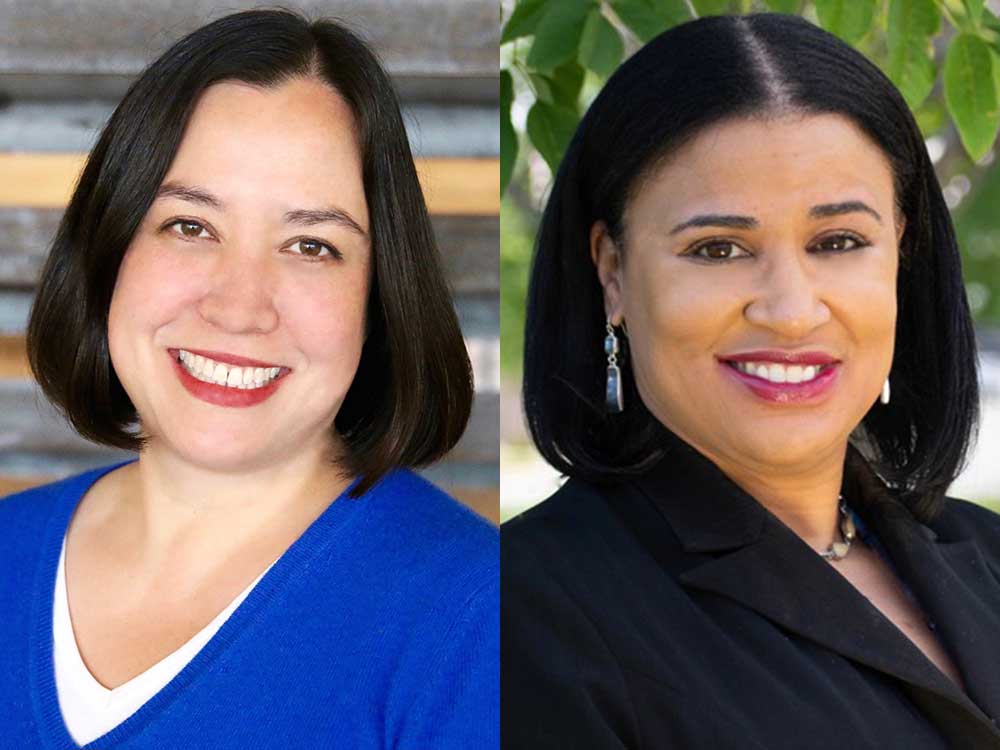 Medill, in partnership with The Garage, Northwestern’s entrepreneurial incubator, has awarded the 2021 Medill and The Garage Media Entrepreneur Fellowship to Katherine Lewis and Chandra Thomas Whitfield.

Lewis and Whitfield are long-time journalists, having written for and worked with organizations such as Atlanta Magazine, In These Times, The Atlantic, The Washington Post and The New York Times. They plan to use the fellowship to launch The Center for Independent Journalists (CIJ), an education, professional development, support and advocacy organization for independent journalists of color.

“BIPOC freelance journalists produce outstanding work and often struggle to make a living, with few resources centering on our needs,” said Lewis. “Journalists of color and women are more likely to build careers independently, and are frequently exploited and underpaid. The pandemic exacerbated this trend. CIJ will provide education in business development, cash flow, contracts, negotiation, prioritization and time management, as well as community support and mentorship.”

“We need to continually innovate to overcome the obstacles facing contemporary media, particularly on issues of diversity, equity and inclusion” said Medill Dean Charles Whitaker. “That is why talented entrepreneurs like Katherine and Chandra are so important and why Medill is proud to support them in their efforts.”

The one-year fellowship supports entrepreneurs from underrepresented groups—with an emphasis on women and people of color—who are working on innovation in the media industry. As part of the fellowship, Lewis and Whitfield will receive an $80,000 stipend for the year, and access to a variety of resources across Northwestern at Medill, The Garage, the Farley Center for Entrepreneurship and Innovation and the University at-large to help them to continue to expand their work.

“I know it sounds cliché but words cannot adequately express what it means to me as a veteran journalist to not only be acknowledged by — but to also be affiliated with — the Medill School and The Garage at Northwestern University,” said Whitfield. “It is an honor, a privilege and definitely a highlight of my career. This is more than just a professional development opportunity for Katherine and me; it is also an opportunity for us to channel our passion, concerns and many years of journalism experience into creating an organization that we firmly believe can fill a huge void and address a long unaddressed need in our industry.”

Throughout its journalism and integrated marketing communications programs, Medill emphasizes the importance of technological innovation and telling the stories of diverse audiences.

The Garage at Northwestern is a community and physical space for every Northwestern student interested in entrepreneurship to learn, iterate and grow. The 11,000 square foot space, carved out of the North Campus parking structure, is currently home to more than 60 student-founded startups and projects.

“Katherine and Chandra are accomplished, seasoned journalists and promising entrepreneurs,” said Melissa Kaufman, founding executive director of The Garage. “We look forward to helping them launch their venture and welcoming them as a resource to our student-founders.”

“Out of an impressive field of candidates, Katherine and Chandra stood out not only for their accomplishments, but for their focus on supporting journalists in the evolving media ecosystem through The Center for Independent Journalists,” said Mike Raab, associate director at The Garage, who helped to select Lewis and Whitfield.

Katherine Reynolds Lewis is an award-winning journalist and author based in the Washington, D.C. area who writes about education, equity, mental health, parenting, science and social justice for publications including The Atlantic, The New York Times, Parents and The Washington Post. Her 2015 story on the school-to-prison pipeline became Mother Jones’ most-read article ever, and led to her bestselling 2018 book, “The Good News About Bad Behavior: Why Kids Are Less Disciplined Than Ever — And What to Do About It.” Her current long-form narrative project on racial justice in education is supported by the O’Brien Fellowship in Public Service Journalism and the MIT Knight Science Journalism fellowship. As a biracial journalist (Asian American and White), she’s been active in the Asian American Journalists Association for more than 20 years. Before becoming a freelancer in 2008, she worked as a national correspondent for Newhouse News Service and Bloomberg News.

Chandra Thomas Whitfield is a multiple award-winning multimedia journalist whose work has appeared in a wide variety of media outlets, including NBCNews.com, The New York Times, The Washington Post, The Huffington Post, The Undefeated, Essence, Ebony, People, Newsweek, The Root, The Grio, TIME.com, NPR.org and the Atlanta affiliate of NPR. As a 2019-2020 Leonard C. Goodman Institute for Investigative Journalism Fellow, she served as host and producer of “In The Gap,” a podcast for In These Times magazine about how the gender pay gap affects the lives — and livelihoods — of Black women in America. Whitfield has also been named “Journalist of the Year” by both the Atlanta Press Club and the Atlanta Association of Black Journalists and received honors from the Association for Women in Communications, the Colorado Association of Black Journalists and Mental Health America. A proud New Orleans native and Clark Atlanta University graduate, she is also an alum of a diverse mix of  other journalism fellowship programs, including with the Schuster Institute for Investigative Journalism at Brandeis University, the Education Writers Association, Ted Scripps Environmental Journalism at the University of Colorado Boulder, Soros Justice Media, Kiplinger Public Affairs at the Ohio State University, the Poynter Institute for Media Studies and Rosalynn Carter Mental Health Journalism programs, respectively. A feature story that she penned for Atlanta Magazine made the Atlanta Press Club’s “Atlanta’s Top 10 Favorite Stories of the Past 50 Years” list and it is also widely credited with contributing to a change in Georgia law and a teen’s early release from a 10-year prison sentence.