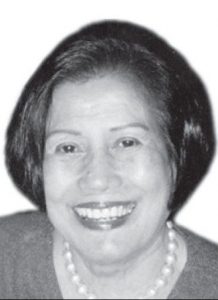 Domini Torrevillas Suarez died Monday, December 28, 2020, in her hometown of Gingoog, Philippines. She was 80 years old.

Domini was a columnist for the Phillipine STAR. Her column “From The Stands” came out in the newspaper’s opinion section every Tuesday and Thursday. She was a feature writer and editor of Panorama magazine in Manila Bulletin Publishing Corp. from 1961 to 1987 before she joined The STAR as columnist.

“At the height of martial law, she was … subjected to military threats, harassments and intimidations for her daring reporting,” wrote a classmate of Domini’s.

She is survived by her husband, Saeed A. Daof; son, Andres Torrevillas Suarez; brother, Lemuel Torrevillas; and sister-in-law, Rowena Tiempo.