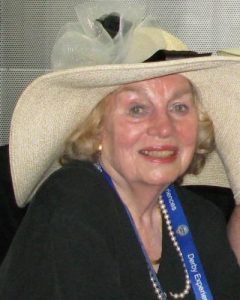 She was a wonderful mother, a strong, independent woman, a true role model in the days when it was not customary to juggle family and career.

Some 14 years after her marriage and six children later, she returned to school to finish her journalism degree at Northwestern. 10 years after she completed her degree and another child later, she returned to school again to become an Illinois-certified teacher. She taught at the Westmoor Elementary School in the Northbrook School District 28 until the age of 69. With hands-on activities and by teaching real life skills, she showed learning could be fun and meaningful. She also managed to serve her community as vice president and program chair of the North Shore Auxiliary of the Chicago Child Care Society and served on the Girl Scout Board.

She remained very active during her retirement years, travelling as far as Egypt with a church group, being an active member of the North Shore Senior Center, and enlarging her circle of lifetime friendships. Family trips also took her out to California, Texas, Australia, Austria, Mauritius, the Reunion Island and back to her roots in Two Rivers, Wisconsin.

Her motto was, “You are never too old.” She even formed a chorus when the Vi at the Glen, a senior living facility, opened in 2002. She saw this as an opportunity to create harmony, with both song and friendship. She never lost her love of music. As a child she saved her milk money for singing lessons. It paid off, as she sang for many years at the OLPH choir and organized annual Christmas caroling parties. As a close family friend put it, she is having a great time singing in the heavenly choirs. She knows she was loved and cherished.