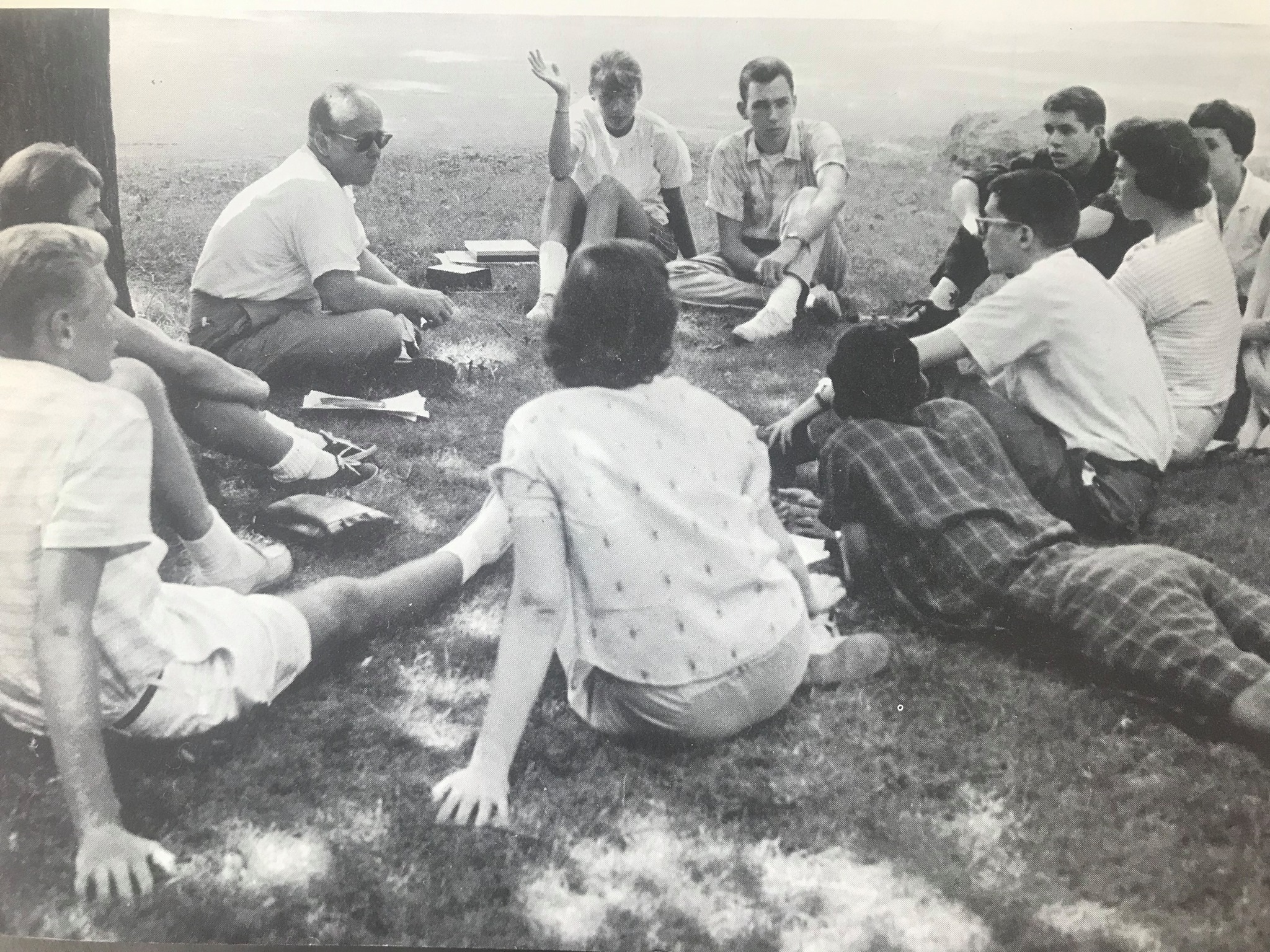 Neither of us remembers the other from the life-changing summer of 1961 we spent studying journalism at the National High School Institute as Medill “Cherubs.” Odds are that we occasionally said hello in passing during our four undergraduate years. We didn’t keep in touch after graduation, either.

But in March 2021, Kathy was asked to help locate former Cherubs to celebrate the Medill Centennial at a Zoom Reunion. All she had to go on was a tattered original roster of the 53 boys and 56 girls, with their high schools and hometowns. No list existed of their current locations. Off-hand, she knew how to find one, and had possible leads on two or three more. Most names did not even ring a bell.

The 1966 Northwestern class directory included information on two dozen former Medill Cherubs who had graduated with her, eight marked deceased and a couple as lost, but for others there were married names, addresses, phone numbers and/or email addresses. So she began.

The first email reply was from Laird Kelly who said he had lost track of most of his Cherub pals. He spent a couple of hours on the internet, discovering that Prudence Mahaffey Mackintosh was still in Texas, a contributor to Texas Monthly for more than four decades, with several books published by Doubleday. He located an obituary for Dick Hodtwalker, another Cherub/NU friend.

Laird emailed Kathy his results, including links. Kathy emailed back: I am very impressed with your research and would like to welcome you as my co-chairman.

For the next four months, we were a bicoastal investigative team, and eventually found nearly all of the 109 1961 Cherubs. At least 25 have died, we couldn’t find nine of them, and three said they weren’t interested. But 70 wrote back enthusiastically describing the Cherub experience as a turning point in their lives. We sent short summaries of their life stories to everyone before an Aug. 1 Zoom Reunion to which about 35 logged in.

Laird set up a spreadsheet to help organize the sleuthing. Jack Rhodes, with 19 years experience as an editor and reporter for the St. Paul Pioneer Press, and Michael R. Whitney, (BSJ66, MSJ67), who won 23 Emmys at CBS News and 60 Minutes, volunteered to track people down. Laird arranged for an Internet service providing addresses, phone numbers, birth, death and criminal records. We looked for folks on Facebook and Linked In, called their high school alumni associations, and checked obituaries of their parents to see who was listed as next of kin, with current residences. We talked to ex-spouses, siblings and neighbors.

We got an invaluable assist from Carol Muller Doig, (BSJ 55, MSJ56) who met her husband, the acclaimed memoirist and novelist Ivan Doig (BSJ61 MSJ62) when both were instructors during our Cherub summer. After Ivan’s death in 2015, Carol donated his papers to Montana State University, including notes and memorabilia from when they were Cherub instructors. She gave us access to the archives.

The more former Cherubs we found, the more gratifying (and fun) the project became. Almost everyone was delighted to hear from us, and astonished to be found.

For both of us, that summer had been pivotal. An Indianapolis native, Kathy thought she had no option but Indiana University, but after the Cherub summer, she applied only to Northwestern. Her Medill degree was like a gold card in her profession, and her marriage to her Northwestern sweetheart took her to California, where she has lived ever since. Laird used his Medill training to start a business, now in its 45th year, in the specialized field of news, television and audio programming for physicians. He called the Cherub program “a beautifully-produced announcement of the Big Wide World for this kid from Kansas.”

As Cherubs, we spent five weeks writing news, features, sports and opinion stories six days a week, crammed into a classroom on the second floor of Fisk Hall, at long tables lined with rented manual typewriters. In the afternoons we heard lectures, did more writing, got in a quick hour on the beach, and in the evenings our minds were blown by startling new ideas from Northwestern professors and Chicago journalists. We lived in dormitories with 17-year-olds from all over the country.

We took field trips to the Museum of Science and Industry, the Chicago Art Institute, a steel mill, a pharmaceutical laboratory and the Chicago Tribune. We watched future Hall-of-Famers Ernie Banks and Stan Musial play in an extra-innings game at Wrigley Stadium. Some of us saw Ethel Merman in a pre-Broadway production of Gypsy, and all of us heard a young Byron Janis play with the Chicago Philharmonic at Ravinia, and Andy Williams sing Moon River in the Empire Room of the Palmer House at Chicago Night Out.

Jim Spears, who became an editor at Newsday, graduated from Hamilton College in New York and earned his master’s degree at that other journalism school, Columbia University, but his Cherub experience was noted in his 2017 obituary.

Bruce Buck said he “really enjoyed the Northwestern program and really wanted to be a journalist for the long term, but my father was a journalist and he encouraged me to do something that could be more financially secure.” He kept his options open during Columbia Law School by spending weekends on the police beat for the Newark Evening News, then practiced law for Wall Street law firms in London. In 2003, Buck became chairman of Chelsea Football Club, one of the top European football (soccer) clubs.

During her undergraduate years at Medill, Linda Grove (BSJ66) developed an interest in China, and earned a master’s in Asian Studies and a PhD in history from University of California, Berkeley. In 1970, Grove moved to Japan to work on her dissertation on the social and economic background of the war in China. At that time Americans could not visit China. She married a Japanese art historian, and taught for many years at Tokyo’s Sophia University, serving as a dean and later vice president of the university.

Martin Stidham (BSJ65) studied Chinese during undergraduate summers. “After graduation, I took a freighter to Taiwan and did a part-time stint with the China Post in Taipei, but soon realized that an excruciatingly slow writer is not cut out to be a journalist.” He began translating contemporary novels, short stories and poetry from Chinese, writing a Chinese vegetarian cookbook and co-authoring two books on early childhood education. He now lives in San Francisco.

More than half of the Cherubs we found had spent at least some portion of their life in journalism, as writers or in a communications-related field.

On summer break from Harvard, Stu Pizer got a job in the mailroom at the New Yorker, then worked under managing editor William Shawn, writing “Talk of the Town.” While offered a full time job at the New Yorker upon graduation, he decided to pursue psychology. He helped found a psychoanalytic institute in Boston and started a writing program for health professionals.

Jack Rossotti (BSJ66) was a reporter, producer and anchor in television news in Syracuse before going to law school, practicing law and teaching law at American University.

Susan Holly Stocking (BSJ66, MSJ67) was a reporter for the Minneapolis Tribune, the Associated Press and the Los Angeles Times, before earning a PhD from Indiana University and teaching journalism there for more than two decades.

Kathy was a reporter for United Press International in Los Angeles, covering the trials of Sirhan Sirhan, Charles Manson, Daniel Ellsberg and John DeLorean, was the Southern California correspondent to The Economist, and a contributing editor of Los Angeles Magazine. She taught journalism on both the high school and college level for 40 years.

Janis Bateman (BSJ66,MSJ67) had intended to be a sportswriter, but she said that spending her summers as a Cherub instructor made her a “lifer” as a journalism teacher, at her own alma mater, Crater High School in Central Point, Oregon.

Peter David Koenig (BSJ66) retired in Buenos Aires after a career as a writer, poet, and university professor, said that the Cherub program “took me out of a small town midwestern high school, and transported me a hundred miles away from my family for the first time in my life, to the Northwestern University campus I knew only vaguely by name, and into the presence of a whole group of able high school writers and professional journalists for a summer that was for me pure bliss, and as Ivan Doig might say in The Last Bus To Wisdom, a ticket to the start of a new life.”

The Zoom Reunion, Bateman noted, had reconnected her with old friends, and “to have your social life re-energized at 77 is something special.”