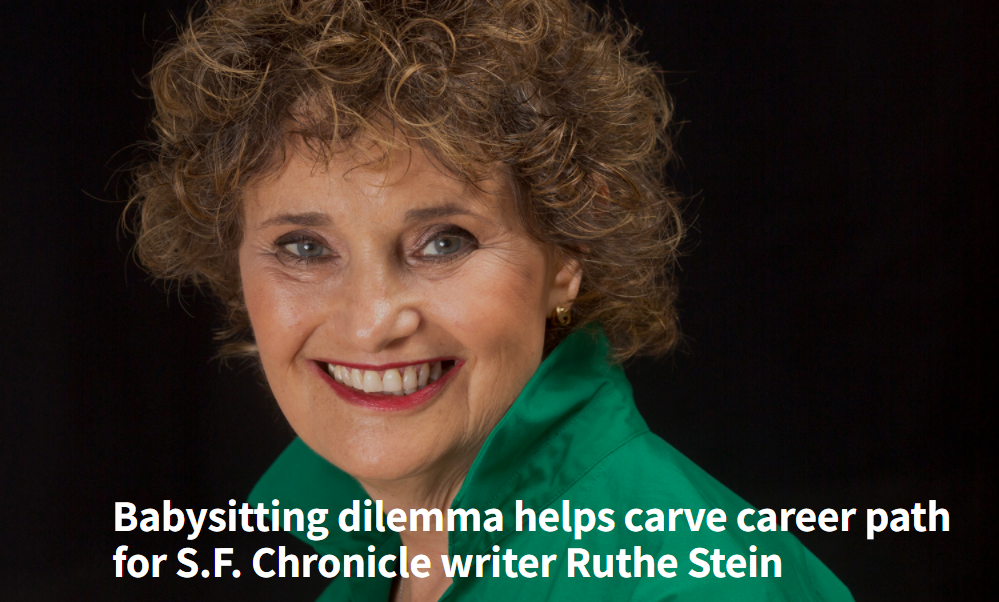 Ruthe Stein’s parents unwittingly imbued her with a love of the movies, a romance that would lead to a lifelong career. Her dad, beleaguered with the responsibility of caring for his daughter on Saturday afternoons, would drop her off at one of Chicago’s giant movie houses.

“The movies were his babysitter,” Stein said. “He never checked what the film was about or if it was appropriate for a 12-year-old, so I saw a lot of adult fare.”

When she went with her movie-loving mother, ticket takers would argue that Stein was too young to be admitted. Her mother argued back:“`Well, she’s not going to understand it.’” Stein recalled. “I was five.”

By the time she was 25, the youthful movie lover had become a professional movie critic, reporting for the San Francisco Chronicle for 50 years. Along the way, she was a reporter for Jet and Ebony magazines, taught journalism, and wrote a self-help book for singles.

It’s easier to make up a roster of A-listers whom she hasn’t interviewed than one that she has. Of course, there are ones who top the queue, like Cary Grant, Princess Grace, George Clooney, Renee Zellweger, Al Pacino, Meryl Streep, Paul Newman and Matt Damon. She’s interviewed about 300 movie stars and directors.

She earned her master’s degree at the Medill and graduated in After a jaunt to Denver, where she taught journalism to community college students for about a year, a serendipitous event reshaped her career.

“The publisher of Ebony and Jet magazines, John Johnson, wanted to diversify the workforce. I’m white and a woman, both of which were missing from his organization. Plus, I had chutzpah and good credentials.” Stein joined the staff as a reporter.

She hung out in the company cafeteria where she never allowed herself to become intimidated in casual conversations with stars like Sammy Davis Jr., James Earl Jones, James Brown or Lou Rawls, she said.

“Initially, I wasn’t taken seriously; I was the token white girl.” she said. “But my experience in interviewing, writing stories for this nationally known African American publication helped open doors.”

Stein started as a feature writer for the women’s section of the Chronicle in 1970, writing about movies and interviewing movie stars and celebrities. She became a movie editor in 1989 and later, a film critic.

Stain managed to eke out more time than many other journalists to talk to movie stars and produce unique, in-depth stories. How did she do that?

“Movies get released and A-list actors are under a binding contract to be interviewed by the press. Lots of times, as a Chronicle reporter with a good following, I was ahead of the queue. I was allowed 20 minutes; I took more and usually nobody minded.

“I tried to get different things from people because I’ve read so many interviews where they’re saying the same thing. I try to think of questions that other people haven’t asked.”

Getting different things from people is Stein’s specialty. Her latest book, ”Sitting Down with the Stars,” a peek into the lives of 100 Hollywood legends, provides subtle but provocative stories about each actor: Who knew that Nicholas Cage’s uncle is Frances Ford Coppola or that Steve Martin is an accomplished playwright or that Antonio Banderas’ words would be so wise?: “There has to be an acceptance that we get older, and that is not good or bad but it is a fact. There is much more of a universe I am living in now, partly because of my heart attack.”

The new book is her second offering; the first was “The Art of Single Living.” She wrote a singles column that was syndicated in 30 newspapers in the U.S. and Canada but stopped writing about the single life when she was no longer single.

She didn’t hesitate when asked about the worst and best films of recent times. The worst: “Basic Instinct 2.” The best: “Little Miss Sunshine.”

Her gauge is like that of most moviegoers: “A good film is one I enjoy, can get lost in for two hours. A bad film is when I keep looking at my watch. It’s a lot of fun to write a bad review, especially of a big Hollywood movie when you know what you write has zero impact. I’m more careful about what I say when it’s a small indie film; a very bad review can put a kibosh on everything.”

In 2006, Stein co-founded the “Mostly British Film Festival,” which shows English language movies made outside the U.S. in places like New Zealand, Ireland and South Africa. The post-pandemic revival of the festival begins in February at the Vogue Theater.

The festival is the revenue generator for the San Francisco Neighborhood Theater Foundation, which helps rescue small, single- to three-screen movie houses like the Vogue, Opera Plaza, Presidio and others from extinction. Stein works closely with Jack Bair, co-director of the Mostly British Film Festival, and Alfonso Felder – both senior vice presidents of the San Francisco Giants – who help raise money for the foundation.

How does one become a movie critic? It’s a question Stein hears often. She said she isn’t certain but added: “I am curious about people. At parties, I’m always a good person to bring along because I can make anybody start talking about stuff. Either you have that ability or you don’t.”

Discipline and productivity count as well. “I have never missed a deadline in all 50 years. While at the Toronto film festival, I interviewed three actors in two different hotels in one hour, and I was not late for a single one of them and I got all my questions answered.”

Since retiring, teaching and lecturing at the Fromm Institute is a big part of her life. Over the past five years, she’s covered a wide range of topics, including Melodrama in Film; Jews and Film; Romance Movies. In the spring, she plans to focus on women directors, the careers of Al Pacino and Robert DeNiro, and inside looks at directors Martin Scorsese, Steven Spielberg and Francis Ford Coppola.

There’s little hard luck in Stein’s story. She grew up in middle- to upper-class Chicago with an older brother and sister. Her father was a boxing promoter who also managed fighters.

“I got to know them when I went to Miami Beach, where he trained them. He got pushed out in the ’50s when fights went on TV and the Mafia got involved,” she said. “Later, he owned and operated clothing stores on State Street.

“I think I get my energy from my mother who was a schoolteacher; she eventually took over the library also. In the ’50s, when the TV networks included movies in their programming, we would be sure to make a night of it, reflecting on the story afterward.”

As this septuagenarian approaches her 77th birthday, she said, “I don’t mind being older as long as I stay healthy. In fact, I’m kind of enjoying it.”

She exercises and walks a lot in her Russian Hill neighborhood and is a voracious reader. Not surprisingly, she watches plenty of movies with her husband, Dean Macris, the former director of the San Francisco Planning Commission.

Her current datebook is filled with talks and events promoting her latest book.

Stein says that by the time she was in eighth grade she knew she wanted to be a gossip columnist. She never had that title, but she came as close as anyone could expect.