Survey Reveals That Americans Overwhelmingly Support Freedom of the Press, but Many do not Trust the U.S. News Media 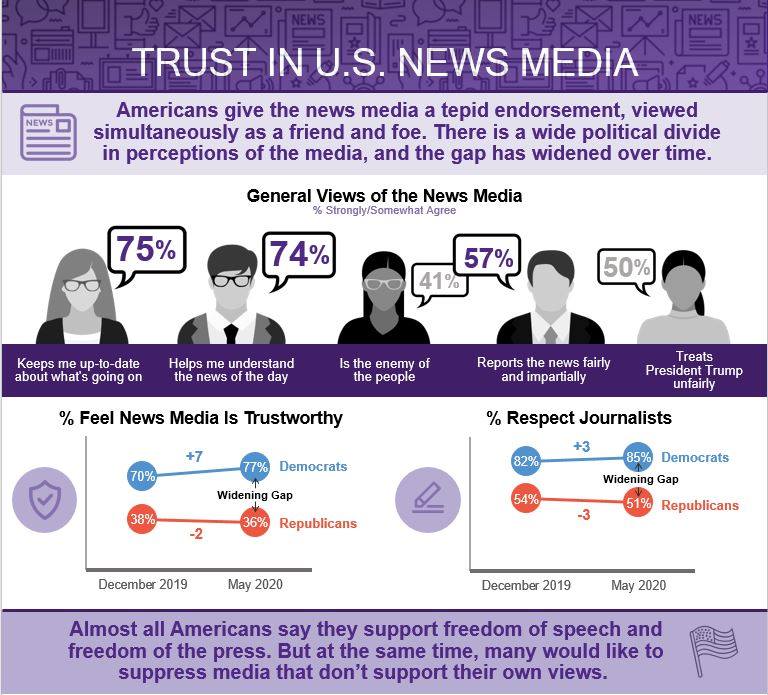 Trust in news media remains tepid with just above half of Americans saying the media is trustworthy, rising only two percentage points from December 2019, according to a new survey by Medill and The Harris Poll.

Americans overwhelming agree that freedom of speech is one of the values that makes the country great and freedom of the press is essential for American democracy; even so, four in 10 say the news media is the “enemy of the people.” Majorities of Americans say the news media are too negative in their reporting and that they report “fake news.” That said, significantly fewer Americans in May compared with December agree that the media reports fake news, suggesting that trust in media is improving in the COVID-19 era. In fact, nearly two-thirds say they trust information about COVID-19 provided by the news media, much more than the 55 percent who trust the information about COVID-19 provided in White House briefings.

Charles Whitaker, dean of Northwestern’s Medill School, said, “This research is a timely snapshot with fresh data on one of journalism’s most critical challenges, that of trust by the audience and larger public. The findings underscore public reliance on professional journalism while wary of social media.”

“The report especially opens the aperture on trust, which in U.S. news media is often narrowly cast in one’s politics and world view. This has been no ordinary year in the face of COVID, racial equality and economic/ cultural fallout with Americans receptive to science, public health and local media,” says John Gerzema, Medill alumnus and CEO of The Harris Poll.

The survey was conducted December 9-11, 2019, and repeated May 27-29, 2020, on behalf of Medill by The Harris Poll. Both polls were conducted online among roughly 2,000 nationally representative adults.

The research was organized and overseen by Everette E. Dennis and Klaus Schoenbach, well-known media researchers, authors and educators. Dennis is professor of journalism at the Medill School and formerly dean and CEO at Northwestern’s campus in Doha, Qatar (NU-Q). Schoenbach, a former senior associate dean at NU-Q, is a distinguished adjunct professor there and honorary professor at Zeppelin University in Germany.

Results for the study’s first wave were completed before the COVID-19 pandemic began, so Dennis and Schoenbach decided to do a second wave to see whether the national lockdown caused an uptick in media use or had influenced change in public perceptions of the news media.  Importantly, the study was conducted two days after the death of George Floyd at the outset of national demonstrations.

As Dennis put it, “Public attitudes toward the news media are as polarized as the country itself, mostly along partisan lines and threatening to the idea of an informed citizenry.  We wanted to see whether reliance on media during the pandemic would alter that perception.  In some significant ways, it did so with regard to some media outlets and news sources.”

Key Findings from the report include:

A complete 60-page report including detailed findings from the Trust in U.S. News Media survey can be found here.