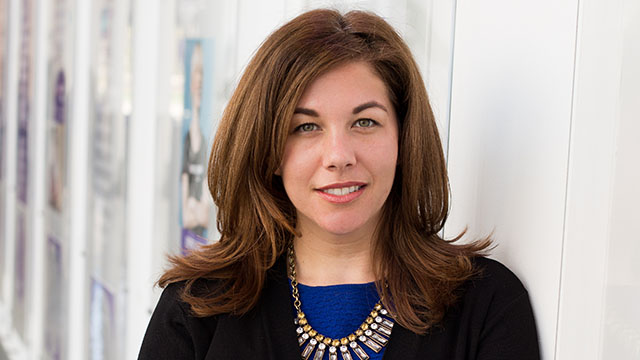 Stephanie Edgerly, associate professor of journalism, has been named the 19th recipient of the Martin E. and Gertrude G. Walder Award for Research Excellence. Edgerly is a pioneer within her field, conducting research on how features of new media alter the way audiences consume news and impact political engagement.

The award, which recognizes excellence in research at Northwestern, was established in 2002 by alumnus Dr. Joseph A. Walder and is gifted annually by the University provost.

“The Walder Award recognizes the excellent research of Stephanie Edgerly,” said Provost Kathleen Hagerty. “I am pleased to present this award to such an outstanding faculty member.”

Edgerly is the second faculty member from the Medill School of Journalism, Media, Integrated Marketing Communications to receive the Walder Award, and the first from the journalism department.

“To be included among the impressive researchers who have won the Walder Award is truly an honor,” Edgerly said. “It’s additionally meaningful to be the first journalism professor to receive the award.”

In addition to her appointment in Medill, Edgerly is a faculty associate at Northwestern’s Institute for Policy Research.

Edgerly’s current research focuses on how people make decisions about what is news and their strategies for verifying information on social media. Working with the U.S. Department of State, she has presented her research to government officials, journalism organizations and the public through six speaking opportunities across the world.

In past research, Edgerly has identified and made sense of “news avoiders,” a group that largely engages with alternate forms of new media, in an effort to implement strategies to engage different individuals and help them better understand the news landscape. Her findings shed light on political and civic participation among U.S. adults.

Past projects have examined the impact of funny news talk shows (like “The Daily Show”), YouTube video activism in political movements (i.e., the Occupy movement) and online news searching behavior.

Edgerly identifies the urgency to stay current and actionable as an advantage to researching media in Medill.

“What I love about being a media researcher is being able to observe a contemporary trend or behavior and saying, ‘I want to know more about that, how can I design a study about that trend?’” Edgerly said.

Edgerly is a speaker in the U.S. State Department’s International Information Program and a fellow in the Lillian Lodge Kopenhaver Center for the Advancement of Women in Communication. She also is a member of several professional associations including the Association for Education in Journalism and Mass Communications and the International Communication Association.

Joseph Walder earned his master’s degree in chemistry from Northwestern in 1972, as well as a doctoral degree in 1975. He also has established a permanently endowed professorship at Northwestern, the Irving M. Klotz Research Professorship. The complete list of award recipients can be found on the Office of the Provost website.