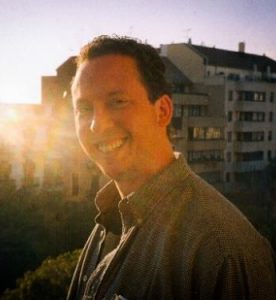 Rickey Lee Wedeking passed away on Wednesday, September 30, 2020. He was born on January 19, 1962, in Indianapolis to Dr. Fred L. Wedeking and Denise O. Wedeking.

Rickey began regaling crowds at an early age with his infectious smile and impish nature. With initial aspirations to follow in his father’s footsteps, Rickey obtained his paramedic degree from Kalamazoo Valley Community College in 1980, the youngest to receive such a degree at that time. He then worked for Emmett and RNEMS Ambulance services and on his first run delivered a baby. Rickey next attended Michigan State University to study marketing, graduating in 1986. During his time as a Spartan, Rickey was very active with the Sigma Chi fraternity. Post graduation, Rickey started his own marketing firm in Kalamazoo, Different Dimensions, Inc. He later owned and operated Plainwell Printing and then acquired his real estate broker’s license to sell houses in the Kalamazoo area.

Rickey lived life to the fullest, living large and loving hard, enjoying the arts, the bars, fine dining, the study of history and the Bible, world travel and, of course, his family. Rickey’s focus changed to healing and fighting after his diagnosis of multiple sclerosis in 1998. Rickey was always positive through tough times and willing to embrace his next battle. He and his family are especially thankful to all those at Alamo Nursing Home, his second family, who cared, laughed, loved and prayed with and for Rickey during his most challenging times.