Q&A with Wendy Sachs (BSJ93), Co-Director and Producer of SURGE 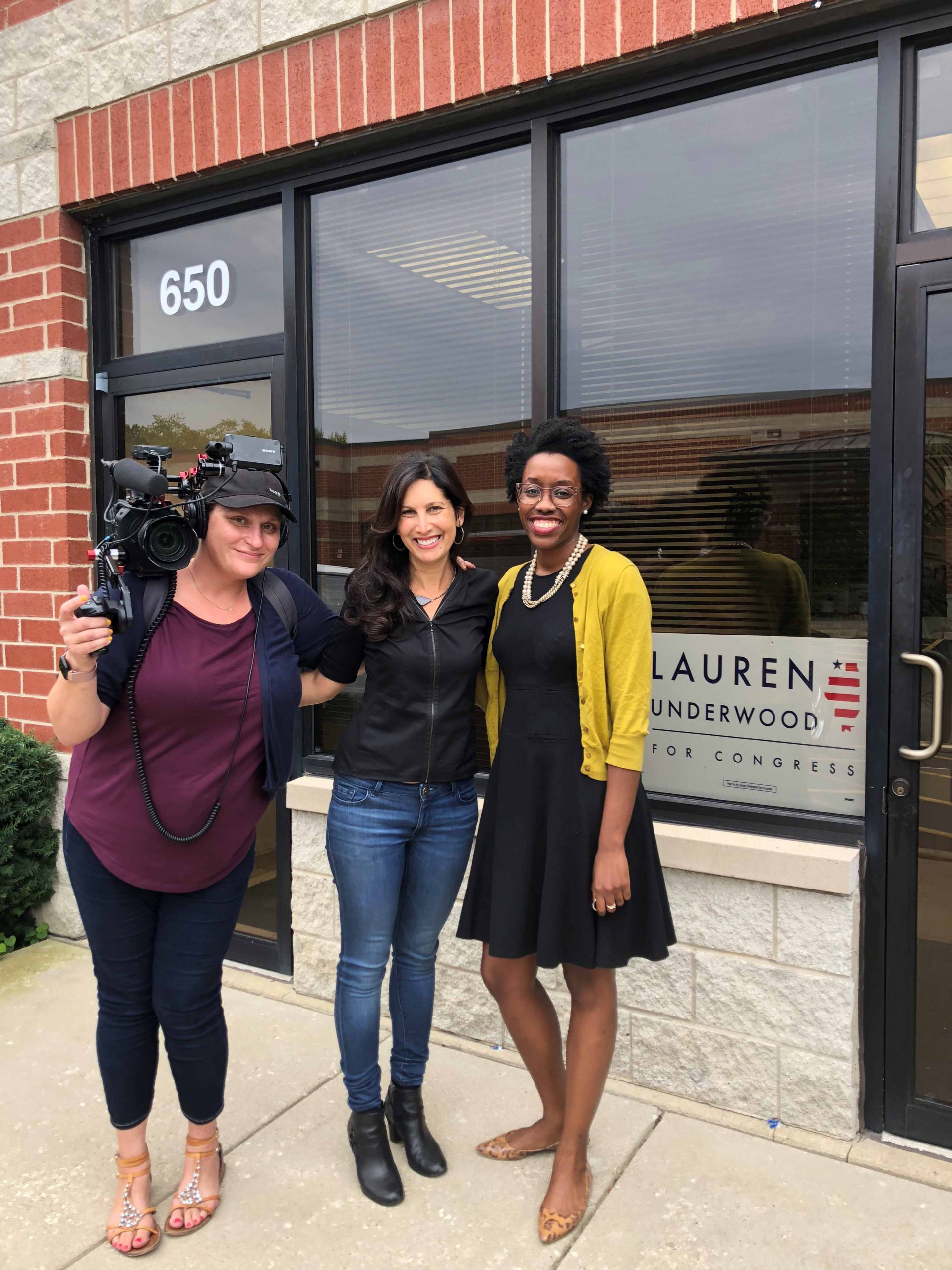 SURGE is a feature-length documentary about the record number of first-time female candidates who ran, won and upended politics in the historic 2018 midterm elections. It will be released on Amazon Prime on September 1 and will premiere on Showtime’s new channel SHOxBET on September 8 @ 9pm ET and available on VOD platforms including Amazon and iTunes on October 21.

Can you talk a little about your Medill experience and how your time at Northwestern helped prepare you for your career?

I’m fairly sure I never got an A in any of my Medill classes. I would actually love to look at an old transcript and confirm that bit of my academic history at Northwestern. But I think because Medill was so small, rigorous and competitive and because I was not one of those exceptional standout students or particularly beloved by my professors, I became even more scrappy, ambitious and determined to prove myself outside of the classroom. Crazy enough, I landed my first job as a Capitol Hill press secretary before I had even officially graduated from Northwestern.  I had enough credits to finish a quarter early and I was worried about taking on more college loans, so I got the press secretary job spring quarter of my senior year. It was an incredible time to be in Washington, DC – a few months after Bill Clinton was elected into his first term. I can proudly say that I was the youngest and lowest paid press secretary on Capitol Hill in 1993.

When was it when you realized that you were ready to weave your experience into a book and can you briefly talk about how writing a book differed from the content creation you’d done before?

I’ve written two books – “How She Really Does It: Secrets of Successful Stay at Work Moms” (Da Capo Press, 2003) and “Fearless and Free—How Smart Women Pivot and Relaunch their Careers” (Harper Collins, 2017) The expression that you write what you know couldn’t be more true. Both of my books were inspired by what I was personally and professionally experiencing at those times. I wrote my first book after I had my first child and I was struggling with how to continue with a high-octane career while also being a fully present and engaged new mom. “Fearless and Free” comes from a very personal place. I had lost my job in 2014. Traditional journalism and media, where I had spent my career working was on life support. I was over 40 and felt like if I didn’t get a job at one of the bright and shiny media startups in New York City sometime soon, I would become a dinosaur. I was afraid of becoming irrelevant.  It also became clear that for many jobs in my industries – media and news – I was too expensive. These industries can hire young and cheap talent. It was after one particularly depressing interview when a bearded Millennial was turned off by that Capitol Hill experience, the job that used to open doors for me, when I realized I needed to switch things up. I needed to re-craft my pitch, hone my story, lean into my skillset but probably learn something new. I also understood that I might need to take a step backwards before I can move forward again.

The SURGE project is three years in the making.  Can you summarize how you got involved in the documentary and how the team came together?

The origin story of SURGE really begins with Hillary Clinton. I had worked with a group called Filmmakers for Hillary right before the 2016 election. My friend Tanya had founded the group. For months, after the first Women’s March in January 2017 there were dozens of stories about women announcing that they were running for office. Many of these women had never imagined that they would run, but now they felt compelled to take the leap.  I reached out to Tanya and told her that I wanted to do a documentary about these first-time female candidates who were running in uphill battles. Coincidentally, Hannah Rosenzweig, who had also been part of Filmmakers for Hillary, had also reached out to Tanya about the same idea. Three years later, Hannah and I just finished directing and producing SURGE. It’s my debut as a film director and producer.  A little footnote – but really important to us was that we only hired female cinematographers to shoot SURGE. This was extremely challenging in places like Texas, Indiana and even Illinois where we were filming. Women make up only about 10 percent of film DPs (directors of photography) and they are largely based on the coasts, but we were so committed to shooting with only women that we jumped through all sorts of hoops to make it happen and to locate talented, local camera women. We are incredibly proud to say that the film was literally shot through a female lens.

How did you select the candidates you chose to follow?

To find characters for SURGE, we started by casting a wide net. We knew we wanted to follow only first-time candidates – women who were running for office for the first time. But we also wanted to make sure we had diversity among the women we followed, geographically and racially and also in their personal backgrounds. Our first shoot was at the bi-partisan Women’s Campaign School at Yale during their week-long boot camp training in June of 2017. At first, we thought the film would be the story of both Democratic and Republican women running in 2018. But rather quickly, we saw that the surge was on the Democratic side. The story of the 2018 midterms and the hundreds of local and state races that year would be about a blue wave of women running and winning.

What do you want viewers to take away from the film?

I want viewers to feel empowered and inspired by the film. SURGE is not only a story about women running for office but it’s the story of women getting behind women running for office. It’s about grassroots activism. It’s about taking a risk and not waiting your turn or to be asked. It’s about saving our democracy. It’s about the power of elections to create real change – and not just at the congressional level – but at the state and local level. I want girls and women to watch the film and see themselves as leaders in their communities. One of the themes of the film is that you may not win the first time. It’s important to remember that even Barack Obama lost his first race. Women often don’t like to take risks because they are afraid of failing and of not being perfect. This film blows up the idea of perfection and failure. Having the audacity to run and speak out, and to make a difference in your district and community — that is success.

Why is it so important to chronicle this momentous midterm election and how do you think it will help inform the coming election?

It’s important to chronicle the 2018 elections because it was a historic, barrier-breaking election. More women and women of color ran, won and upended politics than ever before. Like 1992, the 2018 election was also coined “The Year of the Woman.” But this phrase feels dismissive. Why do women only get a year? It’s important to dig into that and question whether the enormous energy and momentum surrounding this “pink wave” is sustainable. Getting women into the pipeline is critically important, so what do we need to do to make sure this isn’t just another blip on the radar. This is why a theme of the film and a question we asked nearly everyone we interviewed was whether this was a moment or a movement.

What are you most proud of in your career?

I am a modern multi-hyphenate – an author, writer, Emmy-Award winning TV producer, media relations executive, editor in chief of a website, Capitol Hill press secretary, and now filmmaker. I have had more pivots in my career than most but the through line to my career has been storytelling and women’s issues. Directing and producing SURGE has been the most challenging but most rewarding job I’ve ever had. I’ve worn more hats than I can remember. I’m not only the co-director and producer on the film but the booker, chief fundraiser, publicist, marketing executive and fulltime hustler. But most importantly, I’m incredibly proud of the film we’ve created and am in awe of the women who we followed who put so much on the line, all in the name of trying to save our democracy at a critical time in our history. It’s incredibly satisfying to feel that we’ve produced not just a time capsule of what was happening in America between 2016 and 2020 but that this film can live on and hopefully inspire girls and women to run for office and create more gender parity and diversity in politics.