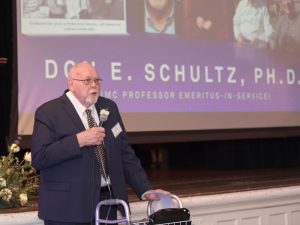 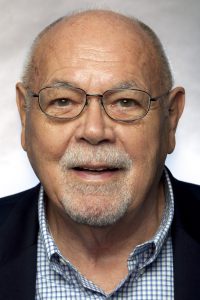 Schultz joined the Medill faculty in 1977. At Medill, Schultz chaired the Department of Advertising in the mid-1980s. He was one of the faculty members who led the consolidation of the school’s advertising, direct marketing and public relations curricula in the late 1980s. In 1991, Medill launched the first graduate-level integrated marketing communications program in the United States. He is commonly referred to as the “father of IMC” around the world.

“Don Schultz was a pioneer of integrated marketing communications, and he helped guide our venerable Medill School toward one of the most important new areas of scholarship and education for our era,” said Northwestern University President Morton Schapiro. “We will forever be grateful for his contributions to Medill and to our University.”

“Don was an academic leader and a prodigious researcher,” said Medill Dean Charles Whitaker. “IMC was his vision and he worked diligently to spread it globally. Scholars and marketers around the world are indebted to Don for how he shaped the industry.”

A prolific scholar, Schultz consulted, lectured and held seminars on integrated marketing communications, marketing, branding, advertising, sales promotion and communication management in Europe, South America, Asia/Pacific, the Middle East, Australia and North America. He is the author/co-author of 28 books, including the seminal “Integrated Marketing Communication: Putting It Together and Making It Work,” as well as “IMC: The Next Generation,” “Brand Babble,” and “Understanding China’s Digital Generation,” among others.

He is one of the most cited marketing communications thought-leaders, with more than 150 academic, professional and trade articles. He was the founding editor of the Journal of Direct Marketing (now the Journal of Interactive Marketing) and a featured columnist in Marketing News and Marketing Insights. He was on the editorial review board of a number of trade and scholarly publications.

“Don constantly challenged the status quo, including his own work,” said Medill Associate Dean for IMC Vijay Viswanathan. “Very few academics and researchers have the humility to do that. Don had an incredible charisma and an ability to connect with people of different cultures. While IMC had core ideas, he always encouraged marketers to adapt IMC for audiences and brands all over the world. He was deeply committed to innovation in both marketing and teaching.”

Schultz’s reach went well beyond the United States. He served as a visiting professor at schools ranging from the University of Beijing and Tsinghua University in China, to Queensland University of Technology in Australia, the Hanken School of Economics in Helsinki, Finland, Cranfield School of Management in the UK, and to the University of Chile in Santiago.

“Real thought leadership takes a very rare combination of things all of which are true about Don Schultz — bravery, courage and willingness to say the sometimes unwelcomed thing. Learned, wise and skeptical. Smart, clever and, ideally, continuously improving,” said Tom Collinger, associate professor and executive director of the Medill IMC Spiegel Research Center. “Because Don Schultz was all of these things, the marketing and communications industry benefitted. And Medill benefitted. And the University benefitted. And there’s the audience that benefitted most: the 30-plus years of alumni all over the world practicing in their profession because of Don’s thought leadership. To say he will be missed would be a gross understatement, but his fingerprints will not just live in the past, but forever be encouraging our future.”

Schultz received numerous honors, including the Distinguished Faculty Achievement Award from Northwestern in 2010 and being inducted into Medill’s Hall of Achievement in 2019. He was given the Ivan Preston Award for Outstanding Advertising Research Contribution by the American Academy of Advertising in 2014 and was named Outstanding Alumni of Michigan State University in 1988, Direct Marketing Educator of the Year in 1989, Distinguished Advertising Educator in 1992, Sales and Marketing Executive of the Year in 1996, and one of the top 80 Marketing Leaders by Sales and Marketing Management Magazine in 1998. In 2020, he was named a Fellow of the Australian and New Zealand Academy of Advertising.

He also was President of Agora, Inc., a global marketing, communication and branding consulting firm headquartered in Chicago.

Schultz is survived by his wife, Heidi, who was his business partner and co-author on several books. He also is survived by his sons Steven, Bradley and Jeff, as well as seven grandchildren Dory, Emily, Jacqueline, Colin, Benjamin, Daniel and Isabel.

In the coming months, Medill and the Northwestern community will come together to celebrate Schultz’s life and legacy.

Gifts given in memorial will be added to an endowed fund in IMC being created by Don and Heidi Schultz. To contribute, you may donate online or mail a contribution to: