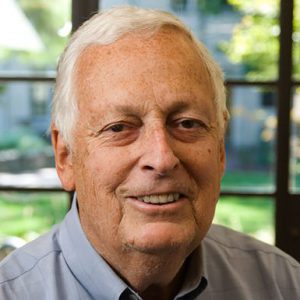 Peter Jacobi (BSJ52, MSJ53), former longtime Medill professor and associate dean, died on December 24, 2019. He was 89. Jacobi was a member of the inaugural class of the Medill Hall of Achievement of 1997 and served on the Medill faculty from 1955 to 1981. He joined the journalism faculty at Indiana University in 1985.

Jacobi’s two guidebooks, “The Magazine Article: How to Think It, Plan It, Write It” and “Writing with Style: The News Story and the Feature,” are standard reference sources for journalists. In 2006 Jacobi received the School of Continuing Studies Teaching Excellence Award from Indiana University.

Jacobi was professor emeritus of journalism at Indiana University and a regular reviewer/contributor to The Herald-Times in Bloomington up until his death.

Jacobi joined the Medill faculty in 1955, working his way up from a professional lecturer to his position as associate dean. After leaving Medill in 1985, he worked as a consultant before joining the Indiana faculty where the taught until receiving emeritus status in 2017.
Jacobi was a member of the American Association of University Professors, the National Academy of Television Arts and Sciences, the Society of Professional Journalists, Arts Midwest, the Bloomington Community Arts Commission and the Indiana Arts Commission, where he was chairman from 1990 to 1993.

He is survived by two sons, Keith Jacobi and Wyn Jacobi, and three grandchildren. Jacobi’s wife, Hattie, whom he met more than 70 years ago, died on Sept. 30, 2019.

Faculty remembrances of Peter Jacobi:
Roger Boye, Associate Professor Emeritus-in-Service
Peter Jacobi was a master teacher, a brilliant lecturer, the proverbial “scholar and a gentleman.” Generations of Medill students owe so much to this man.
I once heard him give a lecture in mid summer in an un-airconditioned room with no slides or visual aids to nearly 100 people who listened in rapt attention for 90 minutes. He was that good.
In 1972, he did a piece for Quill magazine on what it means to be a teacher of journalism, still the best article of its kind ever written. Subconsciously, he must have been describing himself when he wrote:
“To be a journalism teacher at college or high school level, one must be alert to life and living, an embracer of imagination, open to suggestion, free and careful with advice, scholarly in one’s approach to constant and persistent learning.

“A teacher who truly teaches is unsparing of time and the expenditure of energy toward students, helpful, encouraging, young in thought and receptivity, gently authoritative, flexible, never satisfied with himself.
“The journalism teacher has learned to practice his profession and continues to practice it; he does not teach from textbooks. He’s thought about journalism’s glories and its flaws. He has the missionary zeal to improve a human activity that he loves.”
Just a few weeks before the 1978 national convention of the Society of Professional Journalists (SPJ), the speaker for the awards banquet cancelled, leaving organizers scrambling for a replacement. They asked Peter Jacobi based entirely on his reputation; they had never before heard him speak. And as the big event drew closer, they began second-guessing their decision. But Peter did not let them down. He received a rousing standing ovation from several hundred journalists—the only one of six major speakers during that convention so honored. The Quill magazine ran his speech as its cover story in January 1979.
“In our search for the abnormal, the unusual, the eccentric, the different, don’t just look for those people and happenings that are abnormally bad, usually awful, eccentrically negative, differently evil,” he told the convention. “Look for what and who are abnormally good, unusually useful, abnormally fascinating, differently inspirational. Look for good news, in other words, not just bad. But look for news more than we look for pap.”
He also called on journalists to “love words. Sure, appreciate pictures, film, tape. But love words. As long as we remember the value of words and fight viciously against cheapening them, then we’re likely to treat the press with the kind of respect that defeats abuse. Looking toward tomorrow, abuse abuse. In fact, stamp it out.”

David Nelson, Associate Professor Emeritus
In 1964 I learned to take risks in writing: Peter Jacobi taught that class. In 1968 I learned that in any creative craft it’s OK to make a fool of yourself as you experiment and grow in that effort: Peter Jacobi taught that class. When I learned of his death, I remembered that Prof. Jacobi introduced me to Beethoven. Naturally, I played “Missa Solemnis” in tribute.