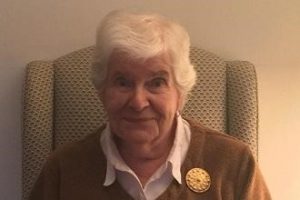 Nancy Frederick Shuker Weyr, a seasoned book editor who worked on some of the most popular books on American shelves, died July 31, 2019.

Her family wrote that “she was an extraordinary woman with specific and dearly missed gifts: a great sense of humor, a strong moral compass, an enduring love of the arts, a generous spirit, and a mind of her own.”

Born July 26, 1934, in Cincinnati, Ohio, Weyr grew up in Nashville, Tenn., and graduated high school there. She graduated from Medill, and soon after married noted documentarian Greg Shuker, with whom she had three children. Her family lived first in Virginia and in 1960 moved to Bronxville, where she lived the rest of her life.
In the book division at Time-Life Weyr worked on books that would become foundational texts in many American households, including Julia Child’s “Cooks of the World” series. She ultimately became chief of research for the entire book division.

She would later go on to run Senator Jacob Javits’s reelection campaign, reflecting a lifelong interest in politics, and to work in several publishing houses. She was made editor-in-chief for “Bottom Line: Personal,” a business-oriented newsletter, and she edited a “huge variety” of nonfiction books over the course of her professional life. After a long career in writing and language, Weyr spent her free time tutoring local high schoolers.

Her family wrote that Weyr loved the arts, especially theater, and was “always looking for ways to enrich the lives of young people” by exposing them to drama.

Weyr remarried in 1992 to Thomas Weyr, a celebrated author and journalist. She is survived by her husband, her two siblings, her children, her five grandchildren, and two great-grandchildren.