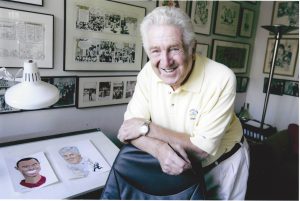 Murray Olderman, an author and journalist who for more than six decades chronicled the sports world with his nationally syndicated cartoons in addition to writing features and columns, died on Wednesday in Rancho Mirage, Calif. He was 98.

Olderman was inducted into Medill’s Hall of Achievement in 2015. He traveled to Chicago to receive his award.

Olderman graduated as a journalism major from the University of Missouri. He received another bachelor’s degree from Stanford, where he studied French in a World War II Army program and was a member of Phi Beta Kappa. After the war, he obtained his master’s from Medill.

From Mickey Mantle to Joe Namath and Bear Bryant to Tiger Woods, Olderman  covered them all. For 35 years he was a syndicated columnist and cartoonist whose work was distributed by Newspaper Enterprise Association to 650 daily newspapers. After serving as executive editor of NEA, he retired from the syndicate but remains active as a writer and artist.

One of the leading national authorities on pro football, Olderman was a past president of the Football Writers Association of America and the founder of the Jim Thorpe Trophy (for the NFL’s most valuable player) and the Maurice Podoloff Trophy (for the NBA’s MVP). His football murals hang in the Pro Football Hall of Fame at Canton, Ohio. He was inducted into the National Sportscasters and Sportswriters Hall of Fame, the International Jewish Sports Hall of Fame, and is in the writers’ wing of the Pro Football Hall of Fame.

In 2013, he published a personal account of his time in the war. “A year apart…Letters from War-Torn Europe,” featured his letters to his wife written from Europe at the end of World War II with added insight into his experience abroad and his family.

He is survived by his daughter Lorraine and another daughter, Marcia Linn; a son, Mark; a sister, Diane Morton; five grandchildren; and three great-grandchildren. His wife, Nancy (Calhoun) Olderman, died in 2011.