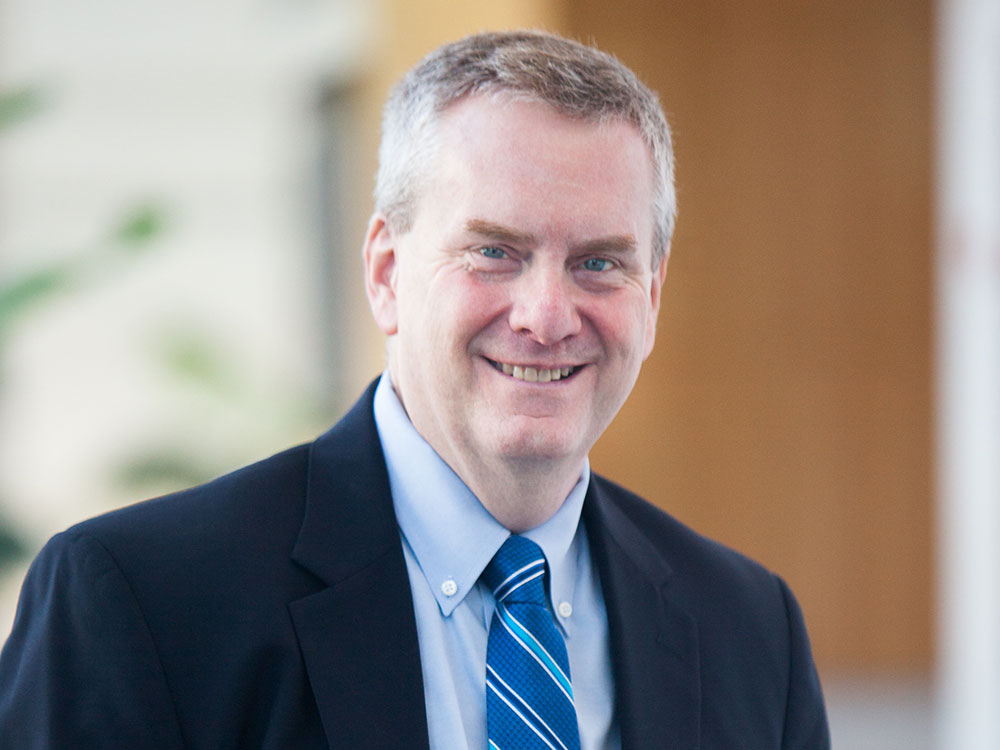 A newly endowed chair will study and support innovation in local news at Medill thanks to a gift from Medill alumnus John M. Mutz (BSJ57, MSJ58).

The John M. Mutz Chair in Local News will focus on local news sustainability. It will advance the aims of Medill’s Local News Initiative, an innovative research and development project aimed at providing greater understanding of how digital audiences engage with local news and finding new approaches to bolster local news business models.

“Local news is vital to our democracy and an empowered citizenry,” said Medill Dean Charles Whitaker. “As the media industry has transformed, local news outlets face unprecedented challenges. We are deeply grateful for John’s visionary generosity, which helped Medill launch the Local News Initiative and will now cement our place as a leader in addressing the crisis facing local news.”

Mutz’s $2 million gift to create the local news chair counts toward We Will. The Campaign for Northwestern, raising his total giving to Northwestern to over $2.3 million. The chair was supported in part by alumni Patrick G. ’59, ’09 H and Shirley W. Ryan ’61, ’19 H (’97, ’00 P) through the Ryan Family Chair Challenge, which matches gifts made by other Northwestern supporters to establish new endowed professorships, or chairs, across a wide range of disciplines. In 2017, Mutz’s commitment of $250,000 to the Local News Initiative was instrumental to the program’s launch. He also is a member of the Henry and Emma Rogers Society, which recognizes those who have included Northwestern in their estate plans.

Mutz earned undergraduate and graduate degrees from Medill in 1957 and 1958. He also participated in the Medill Cherubs program for high school journalism students in the summer of 1952. Mutz’s daughter, Diana, is a 1984 graduate of the School of Communication, and his son, Mark, graduated from the Weinberg College of Arts and Sciences in 1983. Two of Mutz’s grandchildren are also Northwestern alumni: Fletcher, who graduated from Weinberg College in 2017, and Maria, who graduated with a joint degree from the McCormick School of Engineering and Bienen School of Music in 2020.

Mutz is a business leader and politician who served as lieutenant governor of Indiana, Republican candidate for governor and president of Lilly Endowment Inc., one of the world’s largest private foundations. Mutz also served as president of PSI Energy, Indiana’s largest utility (now Duke Energy).

“My political experience has dramatically shown me how important reliable local news sources are to local governments and economies,” Mutz said. “Without it we may lose our democratic society and that would be a tragedy.”

Franklin joined Medill’s faculty in 2017 after serving as president of The Poynter Institute, a leading international school for journalists and a media think tank. Before that, he had a distinguished career in journalism serving as top editor of three metropolitan newspapers, The Indianapolis Star, Orlando Sentinel and Baltimore Sun. His newsrooms won numerous national journalism awards, and The Sun was a Pulitzer Prize finalist during his tenure. Before joining Poynter in 2014, Franklin was a managing editor in the Washington bureau of Bloomberg News, helping oversee coverage of the White House, Congress, Supreme Court and many federal agencies. He also had a 17-year-career as a reporter and editor at the Chicago Tribune.

“I’m honored to serve as the inaugural Mutz Chair,” Franklin said. “John knows from first-hand experience during his political and business career about the importance of local news in our democracy. He’s passionate about the need for robust local news in our society, and he’s also passionate about Medill. With John’s generous gift, Medill will continue to be a national leader for years to come in developing partnerships, programs and new tools to help local news organizations and the communities they serve.”

Medill’s Local News Initiative began its work in 2018 in partnership with Medill’s Spiegel Research Center by analyzing 13 terabytes of reader and subscriber data from the Chicago Tribune, Indianapolis Star and San Francisco Chronicle to gain insights into online reader behavior. Medill now has conducted data-mining research in more than 20 local news markets. Next year, the school expects to roll out a new tool, the Medill Subscriber Engagement Index, which was awarded a Google Innovation Challenge grant. These findings, coupled with additional research and product development by Medill’s Knight Lab, are providing actionable guidance to media leaders about news and information consumers will pay for and how to grow reader revenue.

The funds raised through the “We Will” Campaign are helping realize the transformational vision set forth in Northwestern’s strategic plan and solidifying the University’s position among the world’s leading research universities. More information on We Will. The Campaign for Northwestern is available at the We Will website.