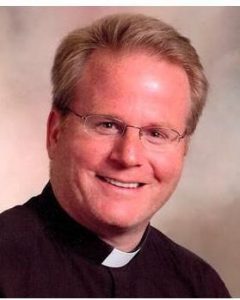 Fr. Matthew T. Gamber S.J., age 61, passed away Friday, October 16, 2020, in Cincinnati, Ohio. Matt was a graduate of Loyola Academy, and received a bachelor’s in political science from Marquette University, a master’s in philosophy from Loyola University, a master’s of divinity from Weston Jesuit School of Theology, and a master’s in journalism from Northwestern University. Father Matt was a gifted journalist, and was published in the National Catholic Register, Catholic World Report and Catholic Herald. He was most recently appointed chaplain and director of youth ministry at St. Xavier High School. Previously, he was associate pastor at St. Francis Xavier Church in Cincinnati, and he enjoyed a lifelong career in the religious order including positions in Chicago, Gonzaga University in Washington, Xavier University in Cincinnati, and in the Vatican Radio and Catholic News Service in Rome, Italy.

Father Matt loved being a priest, and a channel of God’s healing graces and love for the people he served. He led a profoundly spiritual life, dedicated to his faith, his family, the Society of Jesus, and his many friends. Known for his hearty laugh and inquisitive spirit, Father Matt was beloved by many and enjoyed connecting with people wherever he went.