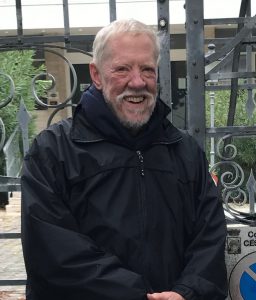 Loren Martin “Marty” Hintz passed away on Sunday, September 20, 2020, in his home surrounded by his family. He was 75. Marty dedicated his life to traveling and writing — learning as much as he could about the world, and sharing the stories with others.

“He was an incredibly expansive human being,” his son Daniel Hintz said, “and just had a zest for life that was really quite infectious.”

Daniel remembers his father, a “prolific storyteller,” was always looking for his next adventure. The publisher of the Irish American Post newspaper, Marty also wrote more than 125 books, his family says, and was Irish Fest’s first publicist.

Hintz grew up in the small Iowa farm town of New Hampton and studied journalism at the University of St. Thomas in Minnesota and at Northwestern University, then worked at the Milwaukee Sentinel.

He later became a freelance writer, his inquisitive spirit never fading. When the family went out to a restaurant, Hintz would pepper the waitress with questions, his son remembers.

Marty overflowed with tales of his travels and his latest projects — but his most meaningful, his son believes, was his journey to find his father’s downed plane in Italy.

Loren Hintz, a fighter pilot, died at 27 when his plane crashed in Italy just before the end of World War II. Marty Hintz was born six weeks later.

He endeavored to know the father he never met, undertaking years of research and digs to find the plane.

When he died, Hintz was producing a documentary about his family’s 2017 successful search for the plane. His family is now working to raise money to complete it in his honor.

Hintz’s friends from Italy, Ireland and around the world have been reaching out to his family since his death, recalling his kind nature and love of storytelling. Daniel Hintz said he’s gotten at least 500 messages from those who knew him.