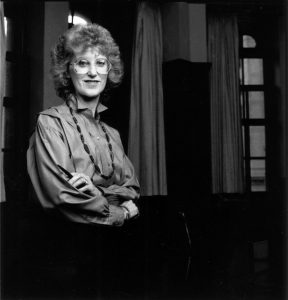 Lois Kroeber Wille, two-time Pulitzer winner and pioneering Chicago journalist, died July 23, 2019. She was 87.  For 34 years she worked as one of Chicago’s bravest, fiercest journalists, often going undercover to report on economic and social inequality—on mental health and birth control, on juvenile justice and maternal care.

But those who knew her also remember her as wickedly sharp, quick and funny, with an upstanding moral code and deep compassion for others.

“For all of her awards and accolades, all her accomplishments, Lois was held in awe by so many people,” said her nephew Eric Kroeber told the Chicago Tribune. “I have heard from so many people, ‘Lois helped me so much when I was just starting out’ and ‘Lois was such an inspiration to me.’ Well, maybe she never heard any of that because it didn’t go to her head. To me and my family she was just the most down-to-earth, friendly and loving human being.”

She began in the newsroom of the Chicago Daily News in 1957, where all but one of her colleagues were male. And she quickly realized those men were held to a remarkably different standard, wrote the Washington Post.

“The men could have tantrums and throw their typewriters and yell and scream if something happened to their copy, or go off on two- or three-day benders, and it was considered very colorful and part of the great Chicago tradition in journalism,” Ms. Wille said in a 1991 oral history interview for the Washington Press Club Foundation.

But women had to appear “in control and calm,” she added, lest they be thought frail or temperamental.

Wille started as assistant to the fashion editor at the Daily News, writing soft news stories for what were then considered to be the “women’s pages,” according to the Tribune. She shot pool with Willie Hop and interviewed Cary Grant about his proclivity for women’s underwear over breakfast.

She thought the lighthearted stories were “really fun,” but gravitated to hard news, once breaking away from a fashion story she was writing to cover a fire she had spotted, according to the Times. After becoming frustrated that the stamps she was using to mail Christmas cards didn’t have enough glue, she pitched and wrote her first front-page story about citywide dissatisfaction with mailing stamps that didn’t stick to envelopes.

That story earned her one of the few hard news reporting slots available for women at the time, and she dove into investigative reporting, covering poverty, mental illness, and social justice.

She often went undercover, according to the Times. For her first series, she exposed abuses in juvenile court by pretending to be a legal aid. She posed as a medical worker in a mental health clinic, complete with white coat and clipboard. The Times wrote that while many might consider her tactics a “breach of journalistic ethics,” Wille was adamant that her methods were justified given the issues at stake.

Less than three months after she reported on the lack of public funding for Chicago birth-control programs, the Illinois Public Aid Commission voted to fund birth-control aid for welfare recipients, according to the Washington Post. Wille’s story won her her first Pulitzer Prize.

Wille was born in Chicago on Sept. 19, 1931. Her father was a German-born architect who specialized in churches, and her mother was a homemaker, according to the Washington Post.

Wille gravitated towards journalism after she read Dale Messick’s comic strip about a redheaded reporter named Brenda Starr. She edited her high school paper and studied journalism at Medill, receiving a bachelor’s degree in 1953 and a master’s in 1954, the same year she married Wayne Wille (BSJ53, MSJ54).

She also wrote the books “Forever Open, Clear and Free: The Struggle for Chicago’s Lakefront” (1972) and “At Home in the Loop: How Clout and Community Built Chicago’s Dearborn Park” (1997).

In 1989, after Wille won a second Pulitzer Prize for her editorial writing, her colleagues wrote of her, “No question. If Lois Wille were running Chicago, it would be a better place. Fairer, more decent, more honest, more demanding and more giving, preserving the best part of its past, while reaching out eagerly to make even more of its future — for all of its people.”

In addition to her husband, Wille is survived by her nephews and several great-nephews and great-nieces.