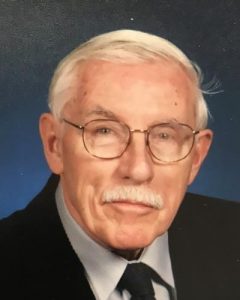 Kenneth M. Wylie, Jr. (J 51, MSJ 52) died on June 1, 2020, at his home in Evanston following a long illness. He is survived by his wife of 66 years, the former Sarah Hibbard, and three daughters: Clarissa Wylie Youngberg, Mary Barr Wylie and Jennifer Sundy Fallon.

Ken was born 93 years ago in southwestern Pennsylvania. He moved as a child to the Chicago area and later to Tidewater Virginia. He served in the army from 1945 to 1947, spending 1946 in the U.S. zone of Germany as a radio technician/operator.

After graduating from Medill, Ken’s work was in magazine editing and reporting, university publications work (Northwestern and IIT), freelance editorial work, industrial technical writing, public relations and advertising. He was devoted to his church (First Presbyterian Church of Evanston) and to his community, serving frequently as an officer of the Kiwanis Club of Evanston Breakfast. During the 1960s he was among the founders of the Evanston Ecumenical Action Council, now known as Interfaith Action of Evanston. He published his novel, “Driving to Mercer,” in 2017.