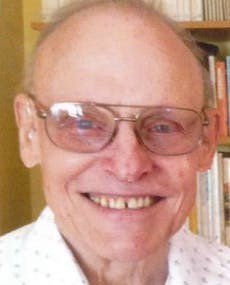 Joseph Blade, a longtime reporter at the Minneapolis Star and Star Tribune, died Nov. 23, 2019 at the age of 85.

Born April 13, 1934, in Oklahoma, Blade began working as a reporter at his high school paper, then attended Medill on a full scholarship.

Blade joined the U.S. Army and spent time overseas in the 50s. But his heart lay with journalism, leading him to write stories and instigate change upon return for over four decades.

His investigative work “consumed” him, his partner of 47 years, Ann Burckhardt told the Star Tribune. She added,“when he was on somebody’s trail, it absolutely took over his life.”

Blade would often rent a motel room where he could spread out boxes of paperwork, toiling “night and day till he had the details he sought,” Burckhardt said.

Blade later wrote an award winning series about job satisfaction. He retired in 1990.

Blade and Burkhardt met at the Star Tribune, where she was a longtime reporter and editor for the Taste section.

Blade is survived by Ann Burckhardt and brothers Bill and Richard.