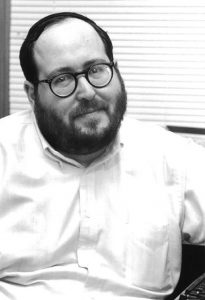 Joseph Aaron, the longtime publisher and editor-in-chief of the Chicago Jewish News, died Nov. 16, 2019. He was 64.

Born in Chicago, Aaron grew up in West Rogers Park, graduated from Hebrew Theological College in Skokie, and then earned a bachelor’s degree from Medill. He began his career as a reporter for Lerner Newspapers and later was the editor of JUF News, the monthly magazine of the Jewish United Fund.

In 1994, Aaron left the Jewish United Fund to start the Chicago Jewish News, which today has a circulation of about 40,000.

Denise Plessas Kus, the newspaper’s production manager, told the Tribune that Aaron’s weekly columns “showed that he was proud of his Jewish community and every once in a while saddened when it didn’t live up to what he thought they could be.”

Aaron explored the positives for Jewish people in the U.S. today, compared with how Jews have been treated at other times in history, said Rabbi Meir Shimon Moscowitz, regional director of the Lubavitch Chabad of Illinois. Moscowitz is the son of Aaron’s longtime friend Rabbi Danny Moscowitz, who died in 2014.

“He didn’t like people who always found the negative in others,” Moscowitz told the Tribune. “He liked people who found the positive in others. And he kept going at it for years and years, which is not easy. And he wasn’t afraid to say what he thought. He was very open and direct.”

Aaron recently celebrated the 25th anniversary of the founding of Chicago Jewish News. Aaron is survived by another brother, Fred; and two sisters, Susie Alter and Sharon Aaron.