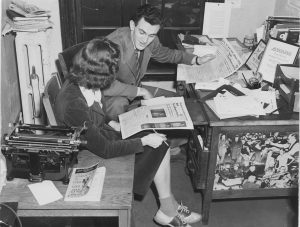 James R. Ward, 98,  resident of Glen Ellyn for 63 years, passed away on January 24, 2020 at Wynscape Health & Rehabilitation, Wheaton. Ward was born August 12, 1921 in Aurora, Illinois to Rev. Elias and Genevieve (Robertson) Ward. Although his home base was Aurora, he lived in and attended elementary schools in Plattville, Sheridan, Paw Paw and Hampshire; he graduated from Plainfield High School in 1938.

At Northwestern University he joined the Phi Kappa Psi fraternity and became a member of the Phi Beta Kappa Honor Society and the Deru Society; he served as editor of the Daily Northwestern in 1941. WWII interrupted his senior year studies as he worked in the Office of Civilian Defense-Youth Division as part of Eleanor Roosevelt’s staff. In 1942 he then graduated from Northwestern and also received a commission as a Navy officer.

Ward served as an aviation specialist stateside and later in the South Pacific as lieutenant fight director on the USS Bataan (CVL-29) until 1945. Following the war, he returned to Northwestern to complete his Master of Science in journalism in 1949; his first job was writing news for CBS in Chicago. He transitioned to work as special assistant to the president of Hotpoint and later was with R. H Donnelly/Donnelly Marketing’s (Oakbrook) as Midwest sales manager for 32 years. Following “retirement” in 1986, he purchased Hinsdale Travel which he continued to own until 1996. He then shifted to selling farm real estate with Coleman Land Company (St. Charles) from which he fully retired in 2007 at the age of 86.

Ward was also preceded in death by his parents, one stepbrother, and three stepsisters.