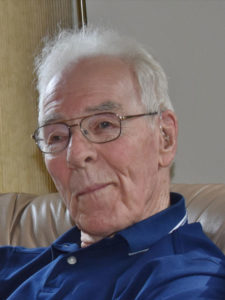 Howard Fibich, 88, of Brookfield, Wisc., died peacefully on February 26, 2020. Fibich was born January 6, 1932 in Oak Park, Ill., and raised in Chicago. He graduated from Schurz High School prior to earning bachelor’s and masters from Medill.

He moved to Wisconsin in 1956 to join the staff of The Milwaukee Journal, where he spent a long and storied career, rising from the copy editing to retire as deputy managing editor in 1993. He was a friend, mentor and frequent goad to two generations of journalists.

Howard was an avid swimmer into his 80s. He competed as a high school athlete and later supplemented college scholarships through summer lifeguard jobs at Lake Geneva. There he met the love of his life, Carrol Jean Anderson. They were married June 5, 1954.

In retirement, he enjoyed travel—particularly trips involving bicycles. He and Carrol were known to log 3,000 miles over Wisconsin’s short cycling season. He had encyclopedic knowledge of jazz, and for about a year did a weekly overnight radio show for WYMS, the Milwaukee Public Schools FM station.His passion for the Chicago Cubs was the dismay of his grandson. Howard also rooted for the Bears, although he warmed to the Green Bay Packers in his later years.

Howard is survived by his wife, Carrol; two daughters, Barbara (Scott Fink) of Middleton, and Linda (William Lawrence) of Catonsville, Md.; and four grandchildren, Amy (Abby) Board of Chicago, Matt Fibich of Wauwatosa, Abby Fink of Minneapolis, and Katie Fink of Montreal, Quebec. His beloved son Steve preceded him in death, lost to cancer in 1995. As Howard wished, no funeral service will be held, and his remains will be cremated. Memorial contributions may be made to The Medill School of Journalism at Northwestern University.