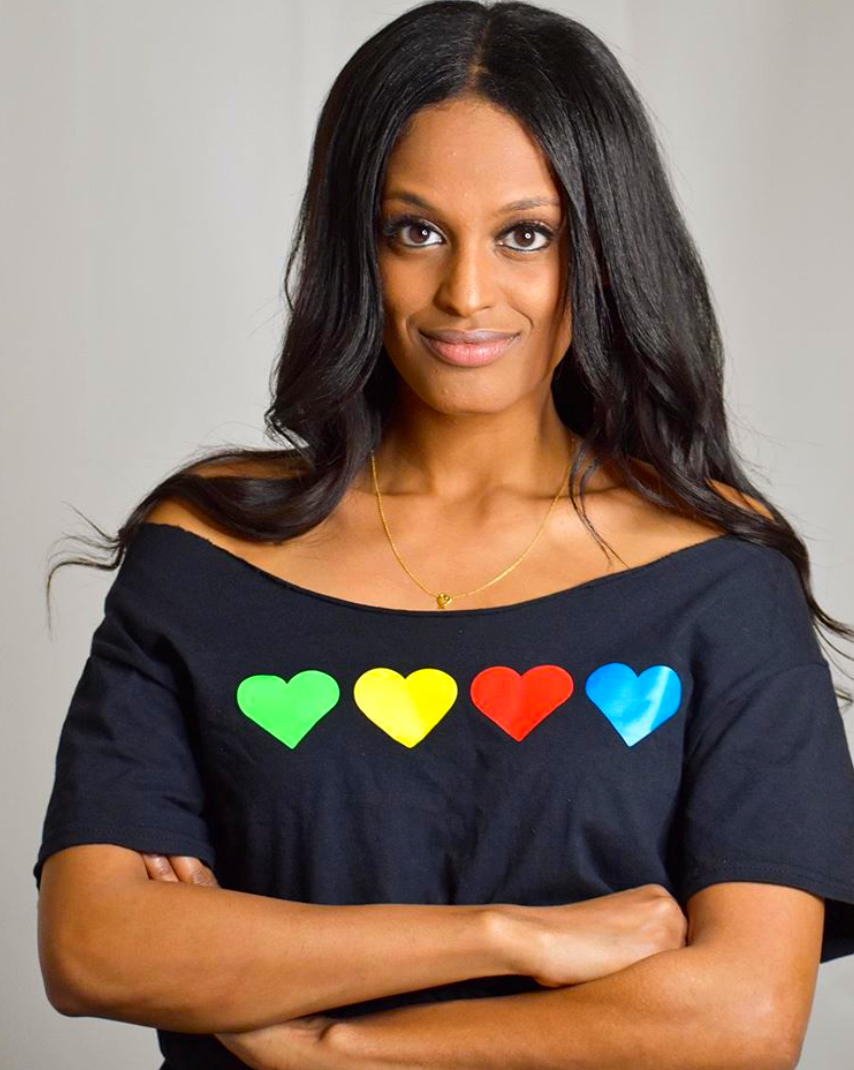 A “leap of faith” has taken Hannah Gebresilassie on a journey from working as a television reporter in a small-town in Illinois to launching headfirst into developing her own media brand.

Late in 2018, Gebresilassie launched HannahJoyTV  and the and the Promote Positivity Movement, combining her passion for entrepreneurship and her love of storytelling to share uplifting news and promote a message of worldwide peace and unity for her followers across social media platforms.

Today, her personal brand and her company are still growing and evolving in ways she never expected.

“It’s taken its own form, honestly,” said Gebresilassie. “I went from just focusing on the storytelling aspect to releasing a brand, like a whole merch line that goes along with it. It went from just sharing positive stories to sharing a positive message in many forms.”

At the end of February, Gebresilassie was the keynote speaker for Project Africa, an annual event hosted by the African Student Association at Georgia Tech, her alma mater.

HannahJoyTV is simultaneously a celebration of Gebresilassie’s Ethiopian-Eritrean heritage and universal content that “anyone and everyone” can enjoy. This duality is reflected in HannahJoyTV’s logo: four hearts of green, yellow, red, and blue, from the colors of the Ethiopian and Eritrean flags.

The design reflects the desire for unity and peace between the two countries that Gebresilassie says she and many members of the Ethiopian and Eritrean communities hope for.

“But it’s also the same colors as Google, if you think about it,” Gebresilassie said. “I wanted to create something neutral that anybody could relate to.”

The daughter of Ethiopian and Eritrean immigrants, Gebresilassie grew up in Atlanta, Georgia. After earning an undergraduate in business administration from Georgia tech and a master’s in journalism from Medill, Gebresilassie fell in love with telling stories and became a television reporter for WSIL-TV in southern Illinois in the summer of 2017.

In her first year, Gebresilassie brought global perspectives to her local TV audience that rippled out across social media. After just a few months on the job, her coverage of an Ethiopian New Year celebration went viral. Not long after, Gebresilassie wore a traditional braided hairstyle on air that again caused a buzz.

“It was actually pretty crazy that I was reporting on this international situation in this little rural town in southern Illinois and people actually really appreciated it,” she said.

By the end of her first year she was in charge of WSIL-TV’s “Going Global,” a news segment where she could report and share stories about immigrant communities in southern Illinois.

“I just saw what I could do,” Gebresilassie said. “When I was working as a reporter, a lot of my stuff went viral. I just kind of said, ‘if I can do this here, what I could do on my own?’”

Gebresilassie said that what inspired her to transition to create HannahJoyTV was gaining a new perspective on the potential that was in front of her.  The biggest challenge Gebresilassie faced was money— she moved from Southern Illinois back to Atlanta, Georgia, where her parents live.

“I’ve been the brokest I’ve been since undergrad, to be frank,” Gebresilassie said. “But I’m happy. I’m happy with the flexibility that I have and I’m thankful.”

Gebresilassie took on side jobs that were easy on her mental health as she developed HannahJoyTV— washing dishes and babysitting.

“I always tell people, everyone doesn’t come from the same type of financial situation,” she said. “And it’s okay to take jobs that can fill the gaps in the meantime.”

But in the past months, Gebresilassie has seen a burgeoning income from emceeing at events around the country and freelance projects she found through connections she made at Medill.

And she has developed an expert eye for cost-saving opportunities to promote her brand— in 2019, she organized a pop-up tour across eight states, around her existing travel plans to visit family.

But managing her time to address every aspect of her platform is also a challenge for Gebresilassie.

“The to-do list never seems to end,” she said. “For me, it’s like my mind goes in sometimes a hundred different directions, so I’m still working on building a structure and making sure that I’m just taking care of everything equally.”

But Gebresilassie has never doubted the direction she is taking— and for that she acknowledges her time at Medill.

“My time at Medill really prepared me to be the ultimate journalist…you’re at Medill with these incredibly talented people from all over,” she said. “And I found my niche while I was there. I found that my heart was in the community.”