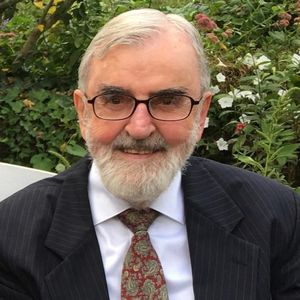 George William Kelly passed away April 7, 2020 from the coronavirus after a four-year fight with cancer. He was 92.

Kelly was born August 21, 1927 to James Lamar Kelly and Laurie Kelly (née Brantley) in Evergreen, Ala. He was the second youngest of his siblings, Dorothy, James, Charles, and Robert. Their father was a lawyer and held the Conecuh County Seat.

In World War II, George enlisted in the Army Air Corps and was stationed in Fairbanks, Alaska. After the war, he attended Medill through the G.I. Bill. He also completed post-graduate coursework in Southeast Asian Studies at the University of Pennsylvania.

His time in New York saw many chapters that combined his passions for science, cooking, traveling, and writing. He researched at an electron microscopy laboratory at New York University, owned a retail shop importing Indian fighter kites called Go Fly a Kite, owned a cookbook shop–complete with a mascot named Cookie the Minah Bird (Cookbooks Only), worked as a public relations director at the Brooklyn Children’s Museum and edited a real estate publication called the Red Book for Yale Robbins Publications.

Kelly also authored poems, stories, songs, and most notably, children’s books. His children’s publications include “What Does the Tooth Fairy Do with All Those Teeth?”, and “Santa Christina and her Sled Dogs,” which was inspired by his time in Alaska.

George is preceded in death by his parents and siblings. He is survived by his wife Jain Kelly, daughter Georgette Kelly (m. Annaliisa Ahlman) of Chicago, and many beloved nieces, ,nephews and great-nieces and great-nephews.