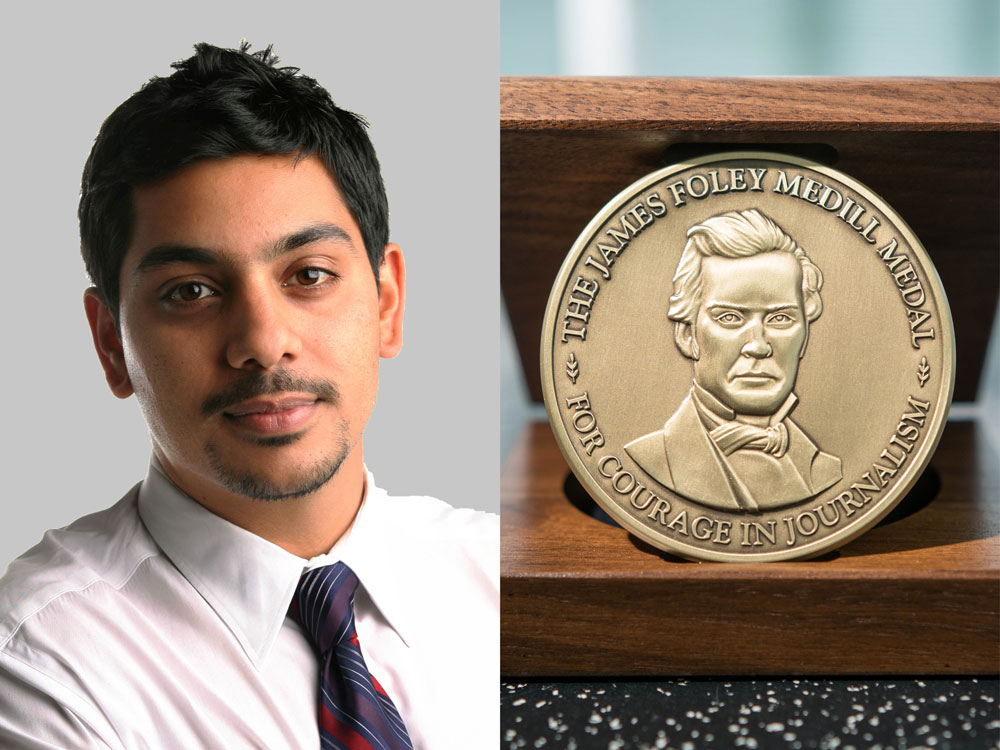 “No one deserves this recognition more than Azam,” said New York Times International Managing Editor Greg Winter. “He has put himself on the frontlines for years, from Afghanistan to Honduras, to document the lives of the world’s most vulnerable people. He does so with compassion, exceptional insight and compelling narratives that draw readers in and remind them, in the most intimate ways, of what people around the world confront on a daily basis.”

In Mexico and Honduras, Ahmed witnessed shootouts and cartel killings. In Brazil, he tracked down police officers who were members of illegal death squads and persuaded them not just to talk, but also to confess to murders and other crimes. After nine members of a Mormon family were killed in remote Mexican mountains, Ahmed traveled to the scene and discovered evidence that had been overlooked, including spent shell casings and a child’s shoe, to create a more accurate picture of what had happened than what the authorities presented.

“Year after year as I read the entries, I think the stories can’t get any more harrowing; the world can’t get any more dangerous for journalists,” said founding judge and Medill Professor Emeritus Donna Leff (BSJ70, MSJ71). “But there seems to be no end to the violence for the subjects and peril for the reporters telling their stories. What stood out in Azam’s work was the riveting, graceful language and the vivid narrative in a deep portfolio that embraced the whole of his domain–Mexico, Central America and the Caribbean.”

Ahmed spent 17 months interviewing one of Mexico’s deadliest hired killers who worked for the cartels. Ahmed exposed closely guarded secrets of the underworld, including an assassin training camp. In Honduras, Ahmed lived inside gang territory for weeks. In San Pedro Sula, Honduras, one of the deadliest cities in the world, Ahmed chronicled the siege of a neighborhood with vivid descriptions of shootouts, gang incursions and last-minute pleas to stop the killing.

“Much in the spirit of James Foley himself, Azam is a daring, gifted and skilled journalist,” said co-judge Brett Pulley (MSJ87), Bloomberg’s Atlanta bureau chief and Medill Board of Advisers member. “In story after story, he demonstrates a willingness to venture into society’s heart of darkness to illuminate the places and people who are integral to some of the globe’s most vexing issues and confounding and violent occurrences. His body of work stood tall above a field of entries that in their own right were tremendously impressive, important and powerful.”

Before moving to Mexico, Ahmed worked for nearly three years in Afghanistan covering the war there. He accompanied the Afghan security forces as they struggled to take over security from U.S. forces, and more broadly wrote about the deterioration of the United States’ longest-running war.

“As I read one arresting story after the next from Azam’s impressive portfolio, I could hardly believe this was the work of a single journalist,” said co-judge and Medill faculty member Ceci Rodgers (MSJ81). “Through his detailed reporting and his access to the inner workings of the drug gangs in Latin America, Azam opens a world to readers in a way that contextualizes the horrors driving migrants to the U.S. border to seek asylum. Beautifully crafted narratives and compelling characters draw us in and make us care.”

This year’s honorable mention also won high praise from the judges. In “Outsourcing Migration,” Associated Press reporters Maggie Michael, Lori Hinnant and Renata Brito exposed the devastating effects of restrictive European and U.S. immigration policies that have resulted in asylum-seekers being sent back to Mexico, Guatemala, Honduras and El Salvador—the very countries many of them are fleeing. The year-long project, funded in part by a grant from the Pulitzer Center on Crisis Reporting, documented the abuse of people fleeing violence, and the benefits gained by mafia, militia and even the Libyan coast guard, which was paid by the EU to warehouse migrants.

The judges will present the award to Ahmed and he will share his journey via webinar on Thursday, July 16 at 5 p.m. Central Time. Joining the event will be special guest Diane Foley, mother of Medill alumnus James Foley (MSJ08) and founder and president of the James W. Foley Legacy Foundation. Visit this link to participate in the webinar.

About the James Foley Medill Medal for Courage in Journalism

The award is named in honor of Medill alumnus James Foley, who was captured while reporting in Syria in 2012 and killed by ISIS extremists in 2014.

The 2019 medal is given for work published during the 2019 calendar year to an individual or team of journalists, working for a U.S.-based media outlet, who best displayed moral, physical, ethical, financial or political courage in the pursuit of a story or series of stories.

The 2018 award was given to Max Bearak, Nairobi Bureau Chief for The Washington Post, for his reporting in 2018 from sub-Saharan Africa. Bearak’s stories from Congo, Niger and Zimbabwe chronicled a wide range of extreme events that required intense bravery in dangerous situations without being reckless or putting himself at the center of the story, said the judges, who were unanimous in their decision.