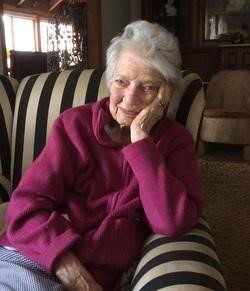 Edith Van Tuyle Phelan, a great-great-grandmother and lifelong volunteer, died June 19, 2019, at the age of 94. She was born in rural lllinois, but graduated from high school in Winchester in 1942.

She was active in the women’s athletic association, a sports reporter for the student newspaper and a member of the Chi Omega sorority.

Phelan was a member of Northwestern women’s rifle team, which was nicknamed the “Pistol Packin’ Mamas.” Before graduating, Phelan married Dick Phelan, a graduate of Northwestern’s engineering program, in 1945, and had four children.

As president of the Northwestern Alumnae Association she was honored with an award for her service in 1981, and in 1996 she served as co-chairman of her class’s 50th reunion celebration.

She volunteered for the Children’s Home and Aid Society of Illinois, and was recognized by the Chicago State Street Council for her efforts. She served as a librarian for the First Presbyterian Church of Evanston and for fifty-four years as a judge for Cook County elections.

She was a member of the Chicago North Shore Chi Omega Alumnae group, the Evanston Woman’s Athletic Club, the North Shore Senior Center and the Winnetka Genealogy Writers Group.