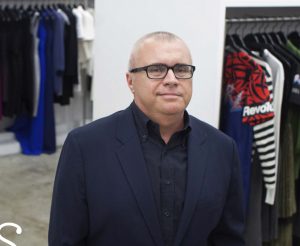 Ed Filipowski, co-chairman and chief strategist for fashion public relations firm KCD, died at home on Jan. 10, 2020. He was 58.

Filipowski was raised in a small town in southwestern Pennsylvania, where his father was a steelworker. Realizing early on that he had a talent for writing, Filipowski started working for the local newspaper as well as the high school paper and radio station. “I was attracted to anything media-related, and I was driven to be a journalist,” he said in a story for the Medill magazine in 2014. He knew Medill was the best journalism school, so he borrowed money from his sister for the application fee. “I was fortunate to get in the door,” he said in the Medill article, adding that he received nearly a full scholarship.

Fashion, too, was always in the back of his mind. In Evanston, Filipowski immersed himself in campus life, joining Theta Chi fraternity, the activities and organizations board, and The Daily Northwestern, where he edited the first fashion supplement.

After graduation, he moved to New York City and shared an apartment with a friend he met at NU, Rachel Sparer. Another NU alum, Jack Taylor, hired him as an assistant account executive in the rapidly growing ad agency Jordan, Case, Taylor & McGrath. There, Filipowski developed a solid understanding of brand strategy and product storytelling in a short period of time.

He heard about KCD through a friend, and when the company landed a big client, he sent partner Kezia Keeble a bouquet with a congratulatory note. The flowers led to a meeting, which led to a job offer. Over the next few years, he gained an understanding of the inner workings of the fashion industry from Keeble, a former Vogue editor. He also learned about fashion criticism from the firm’s other partner, and NU alumnus John Duka (BSJ71), a former style reporter for The New York Times. KCD’s goal was to get fashion covered more seriously in the media beyond tabloid headlines.

In 1990, Filipowski, along with colleague Julie Mannion, informally inherited the firm, working alongside Cavaco following the deaths of Duka and Keeble in 1989 and 1990, respectively. In 1991, Filipowski and Mannion were named partners of the agency, and renamed the firm KCD to honor the founders.

“When I’m standing with Sarah Burton at McQueen, and she’s taking me through her thought process, I can’t believe my life. It’s a privilege,” Filipowksi said in his Medill magazine interview.  “I’m very personal and hands-on,” he added. “I tell everybody when they’re hired, ‘We will give back to you double what you give to us, because I want this to be a personally and professionally fulfilling experience for you.’”

He attributed his success at his agency to the knowledge and values he learned at Medill. “If you have good personal and professional values, and you work really hard, and if you’re good to people you work with and meet, it just happens,” he said.

Over the last several years, Filipowski visited Medill numerous times to talk with students about his career, and KCD hosted a Medill journalism residency (JR) student in 2018. He generously supported the Ed Filipowski Student Experience Fund for students on JR and he served as the co-chair of his 35th reunion committee.