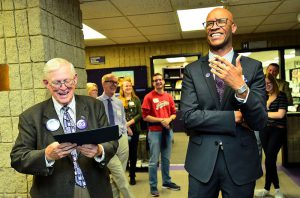 Ed Bryant, who served on the Students Publishing Company board of directors for 48 years, died Sept. 20. He was 78.

Serving on the board of Students Publishing Company for 48 years, Ed Bryant’s colleagues pegged his commitment and longevity to The Daily Northwestern’s “legacy of journalistic excellence” as typical of his character.

A former opinion writer at The Daily in the 1960s, the Medill and Pritzker alum joined the SPC board of directors — The Daily’s governing body — in 1972.

“To say he was the pillar of the organization would be an understatement,” John Byrne, chair of the SPC board of directors and former Daily editor in chief, said of Bryant’s legacy.

L. Edward Bryant, Jr., an “instrumental” force behind SPC’s evolution and survival, died unexpectedly of a new recurrence of cancer Sept. 20 at the age of 78. He is survived by his three daughters, Laura, Diane and Emily, as well as two grandchildren, Sydney and Miles.

Once a Wildcat, always a Wildcat

Byrne, who knew Bryant since 1989, said Bryant always cared deeply for The Daily as an institution and ensured it endured for generations to come.

Bryant was one of the driving forces of the Campaign for the Future of The Daily Northwestern in 2014 — a move to transition The Daily’s business model to a digital one that relied only on advertising revenue to pay the bills. Bryant understood early on, Byrne said, that the future of print advertising was in trouble, and his foresight helped shape what The Daily is today.

“He was terrific to work with on the board, always listening, but also providing historical perspective that literally cannot be replaced,” Byrne said. “He often had a good story or anecdote to share, pretty much given whatever subject we were discussing, but it was clear that the Wildcats were so near and dear to his heart.”

A lifelong supporter of Northwestern, Bryant had been a football season ticket holder since 1963. According to an obituary written by his daughters, he was a proud Evanston resident for 61 years and “appreciated the diversity and community spirit” — especially the annual 4th of July parades.

He also often spent weekends with his family at Rock Haven, a lakeside cottage in Wisconsin, nicknamed “The Purple Palace” due to its decor. Its walls were fully adorned in purple — a tribute “to his beloved Wildcats.”

Medill Dean Charles Whitaker met Bryant in 2003 when he joined the SPC board of directors and remembers Bryant’s “thoughtful presence” throughout the years in steering the company. Bryant was the board’s “de facto” libel attorney, as well as a trustworthy counselor and advisor when it came to selecting editors in chief, Whitaker said.

Even when Whitaker stepped down from the board, he and Bryant remained close. Always a supporter of student journalism, Bryant would share stories written in The Daily with Whitaker that he would find interesting or important and engage in conversations about the publishing industry. Outside of his role on SPC, Bryant was also well-known for his dedication to a particular hobby.

Bryant’s joy of fishing never wavered, according to his colleagues, evident from the “several” trips he made every year.

“In the entire time that I knew him, he was always battling cancer of one form or another, but he was always hearty and happy,” Whitaker said. “Once after a particularly difficult bout of (chemotherapy) — he was as upbeat as he always was — I asked him how he was doing and he said he was going fishing.”

The entire time he was battling cancer, Whitaker said Bryant would “never” miss a trip and always make a point to set out on Lake Michigan. Bryant’s perseverance and unwavering morale, Whitaker said, is something he’s always admired.

After graduating from NU, Bryant started his legal career at Gardner Carton & Douglas in 1967 and worked in the field until 2010. At the firm, he founded its Health Care Practice in 1979 and served as the chair of the Health Care Department years thereafter, also serving on the firm’s Management Committee.

Over the course of his career, he served on the faculty of Loyola University Chicago’s School of Law and the Kellogg School of Management. In 2011, the L. Edward Bryant, Jr. National Health Law Transactional Competition was established by Loyola to engage law students in dialogue with practitioners in a real-world setting about legal issues pertaining to health care providers.

In 1985, Bryant was named as one of the most outstanding health lawyers in the country by the National Law Journal, and then again in 1991 by both the Illinois Legal Times and Chicago Lawyer Magazine.

According to Edwin Getz, his partner at Faegre Drinker Biddle & Reath — GCD’s successor firm — Bryant counseled clients on hundreds of health care industry restructurings, hospital and health system mergers, and more. Many of his cases in health law involved some of the largest health care providers in the country, Getz wrote.

Not only was he admired and widely respected by his clients and colleagues, but Getz added that Bryant is “widely and justifiably regarded” as having originated the discipline of health law.

“(Bryant) cared deeply about (the firm’s) people, no matter their position at the firm or station in life,” Getz told The Daily. “He always made it his highest priority, regardless of his frenetic schedule, to devote the time to mentor colleagues and friends who sought out his guidance, especially young lawyers.”

Donate to the Daily Northwestern

Story republished with permission from The Daily 9/25/2020