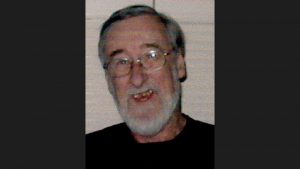 Dr. Robert “Bob” Boyle shared his passion for English and journalism with students at New Trier High School for 34 years, and later mentored future teachers at Northwestern’s School of Education and Social Policy. He died May 12, 2019 at 86.

Boyle was born on May 16, 1932 in Iowa, and attended high school in Saginaw, Michigan. He received a full scholarship to Northwestern, where he studied education and journalism at Medill, and then earned his master’s in journalism a year later. He was placed as a student teacher at New Trier High School, and was promptly hired for a permanent position. As an English teacher, he taught drama, journalism and literature. He also sponsored the student paper, the New Trier News. The Chicago Tribune reported that Boyle taught students how to write journalistically and even held fake news conferences so his journalists could practice their reporting skills.

As a drama teacher, he specialized in Shakespeare, and directed 15 student productions at NTHS until his retirement in 1988. During summers he earned his doctorate in Theater Arts from New York University, and wrote his dissertation on Elizabethan Theatre.

Another former NTHS teacher told the Tribune, “He made kids like things they wouldn’t ordinarily think they wanted to like—Shakespeare being one…and that was because of Bob—he made it real in their lives.”

After retiring from NTHS, he worked for Northwestern at the Newberry Library and SESP, where he helped place student teachers at Chicago schools and organized seminars for teachers to learn about research.

He is survived by Mac Detmer, his spouse and partner of seventeen years; his stepchildren, Stuart and Allison; his sister, Patricia Boyle Savage; and nieces, nephews, friends and generations of students.